1TB NVMe: How Does it Impact Your Videography Business? 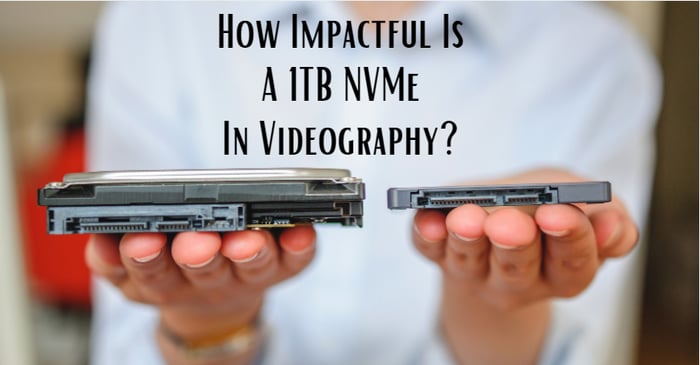 Time is of the ultimate essence when it comes to making money for any business, and this statement cannot be more true for the video industry.

In our previous blogs, we have already settled how NVMe is way faster than any other storage solution. And in this blog, we’ll take a deeper look at how beneficial a 1TB NVMe is for videography.

In the era of the ultimate ultra-high definition videos, including 4K and 8K production, it is not an easy task to process these videos and edits them without reliable technology. You will have to work with huge files, which calls for better storage. Hence, we can’t stress enough that investing in good and reliable storage systems is extremely critical.

This is where NVMe devices stand out from the competition. NVMe SSDs are the new standard for data transfer rates at the highest conceivable level and have been employed in numerous corporate settings, including video, finance, e-commerce, client support, and DevOps.

So, without further ado, let’s help you understand the impact of a 1TB NVMe SSD on your videography business.

When SSDs first came into the picture, they were extremely expensive, limiting manufacturers to roll out devices in a storage range between 60GB and 128GB. However, as time passed and more areas of development opened up in the SSD market, the storage capacity ceased to be the cost bottleneck. Eventually, SSDs with larger capacities started flooding the market. Now, a 1TB SSD has become almost a universal storage configuration.

In order for you to know the storage capacity of your SSD, you must know your workflow requirements. This way, you can make sure you do not end up with storage issues. Besides, SSD prices are directly proportional to the increase in capacity, and hence, buying the largest capacity SSD out there is probably a waste of your money.

Factor in your requirements and budget to choose an SSD with the best-suited capacity for your business. Apart from the comprehensive factors we have discussed, you must also understand the working capabilities of your computing system.

If you are into graphics-intensive works such as designing or video editing, your C disk is more likely to be stuffed with heavy and sophisticated software. Since most professional software occupies relatively more system resources, your C disk might need a greater capacity, and the 1TB SSD is the most preferred option. 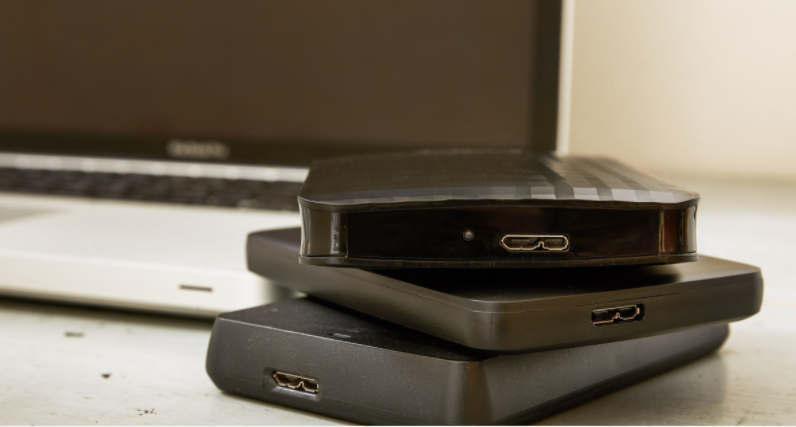 To be more specific to the videography sector, we might have to dive deeper into the role of an SSD device in a typical video editing lifecycle or workflow. To put it simply, any video editing environment depends on various factors that define how the work is done. The most influential among these factors is the drive speed that explains how fast the system reads the video files from the storage disk and writes them back.

SSDs access information at an instantaneous rate because of the lack of moving parts, and they offer speeds four times better than an HDD. HDDs have mechanical moving parts that limit their speeds to a moderate range. The drive speeds of SSDs serve as the most crucial factor that sets them apart from the lot. As SSD technology is evolving and bottlenecks are constantly taken away from the picture, these devices are now better than ever. SSDs can locate data, retrieve it, and write it back at fast rates, while HDDs have to move mechanically to perform read/write or to identify and access data.

Modern HDDs can go up to a capacity of 150MB/s, while an SSD counterpart can go till 550MB/s. The speed difference here is pretty prominent and has a significant influence on how SSDs are perceived in the market. SSDs involve a flash memory to store data, and the access speeds of this arrangement fall in a range between 35 and 100 microseconds.

In the case of HDDs, this range is from 5000 to 10000 microseconds. So, as the numbers speak for themselves, SSDs are almost 100 times faster. This increased speed will facilitate the seamless running of programs and prompt data loading, which will fit right in a videography workflow that deals with large data volumes for accessing and processing.

Now that you understand the basic difference in the read/write speed of HDDs and SATA SSDs, let’s help you understand how NVMe drastically changes the scene.

While SATA SSDs are smaller in size (up to 4 TB) and are much faster than HDDs, they utilize the older SATA III protocol, which is slow (up to 600 MBps). On the other hand, the newer NVMe SSDs offer similar storage space and connect directly to the PCIe slot, offering breakneck speeds (up to 5000 MBps). If you want fast transfer speeds, a lag-free editing experience, and the option to edit multiple large raw files simultaneously, invest in an NVMe SSD.

And if that wasn’t enough!

Third-generation PCIe bus offers up to 16 lanes for use, offering speeds of up to 1 Gbps. You can have one, four, eight, or 16 lanes in a single PCIe slot, increasing your video editing computer’s performance manifold.

See how upgrading to NVMe can literally accelerate your business?

How Useful Is The Nvme SSD 1TB?

NVMe has established itself as the fastest flash storage and has set the standards for efficient data transport between different servers and storage systems. However, to proceed further with the discussion of how NVMe is beneficial, it is essential that you understand how it works.

A Non-Volatile Memory Express device involves a storage interface that does not delete or write when your system reboots. This might sound unconventional but has a significant impact on the performance factor.

NVMe is crowned to be the best storage interface available in the market for computing devices of all kinds as there is a huge difference in reading/write speeds when compared to other conventional interfaces. The term “Express” indicates that the data transmission occurs across the PCI Express interface that has a consistent and straightforward connection with the motherboard. This is better than the traditional method in which the data jumps over a SATA (Serial Advanced Technology Attachment) controller.

There is no denying the fact that NVMe drives function with better speeds compared to the traditional SATA drives that have been in use for years now. 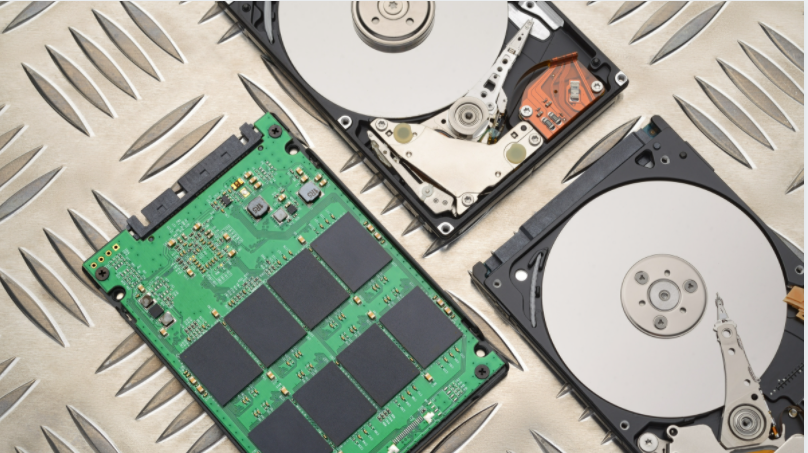 To get a clearer picture, we can compare both entities in the context of speed:

To compare the difference, we can consider the current generation standard of PCIe, which is around 985 Mbps for a lane, and since NVMe drives can make use of 4 such lanes, in theory, it is possible to achieve 3,940 Mbps of maximum speed. When you compare this number with one of the top-tier SATA SSDs speed-wise, the variation is enormous. Compared to the older hard drives, NVMe lowers your editing workstation’s latency and increases its IOPS ((input/output per second) while offering access speeds up to 100x faster than traditional HDDs.

NVMe drives also come in different forms, such as an m.2 stick with 22 mm wide and different length variations like 100, 80, 30 mm, etc. The high cost of these devices is attributed to all the benefits they offer, and this clears up why NVMe drives are more expensive than conventional ones.

Among the several benefits of NVMe, three critical aspects that everyone should understand are:

In all honesty, even a low-end NVMe can offer better performance than the best SATA SSD in the market, and this additional performance will make a substantial difference in user experience, especially in the video industry. In addition, we know that NVMe SSD provides faster startup and lower loading times that allow them to make the whole system better and more seamless.

The price might seem like the major downside, but when you consider what you get, it adds up. In videography, we need to copy and work with very large files, and an NVMe device can make a huge difference in the efficiency of the workflow here. In addition, the better drive speeds save us a ton of time and aids in better file management.

We cannot completely throw our SATA devices off the shelf yet because it all comes down to the requirements. If a business or a process does not require the higher speeds offered by NVMe devices, then high-end SATA that are less expensive will do the job. Besides, you can avail more capacity SATA for lesser prices than NVMe devices.

On the other hand, if you have data-intense processes involved and you want to perform tasks on large files, it is better to go for NVMe.

How Incomparable Is The NVMe 1TB?

We have already discussed how NVMe has become the industry standard for operating speeds and how they are functional and capable. They are not limited to SATA interfaces and provide superior compatibility and storage. This sets the tone for explaining how incomparable an NVMe device is, especially with a 1 TB capacity. However, before making an investment, you must ask yourself if you need it or not.

The best bet here is to choose the device that offers the most performance. Even though it is quite expensive to completely move away from mechanical drives, working with video processing, or other related activities that involve frequent loads and writes calls for better performance.

The significant advantage that needs to be highlighted is that NVMe drives capitalize on parallel data paths with low latency, leading to high performance. NVMe drives include an architecture that offers a drastic advantage over your regular SATA and SAS protocols, which accelerates the efficiency and performance of the existing applications. This is very relevant for videography as it means working with high-performance programs and applications. 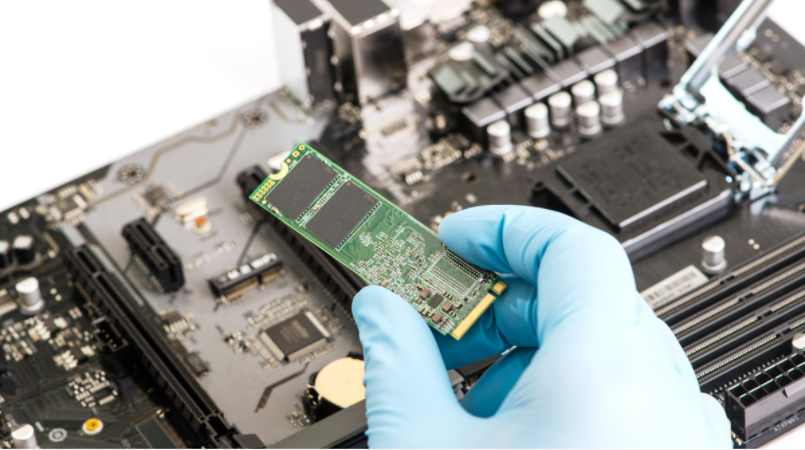 Besides, raw video files are huge. The higher the frames per rate (FPS), the larger the file. Ideally, one uncompressed frame amounts to around 5 MB. So, if you have a raw file recorded at 60FPS, per frame will consume 300MB. Imagine the size when you’re dealing with gigabytes of UltraHD, 4k, and 8k videos. With these large files, it gets challenging to collaborate and continue post-production work on the videos using generic storage solutions like hard drives, cloud, etc. This is where choosing an NVME storage solution over other conventional modes makes all the difference.

In today’s age, users expect quick response times, and it has become a necessity. Even the software and applications these days have become more resource-dependent and complex. In order to deliver low-latency, improved user experience, and higher bandwidth, it is essential for video professionals to switch to NVMe drives, which support several thousands of parallel command queues. The NVMe architecture makes use of the non-volatile memory in computing environments, making it incomparable.

With the rising demand for high-resolution videos, it is in your best interest to upgrade at the earliest. It might be a tad bit more expensive than traditional SSDs. Still, with innovative solutions like NVMe-oF (NVMe Over Fabrics) and Parallel I/O, NVMe storage’s dominance will expand to offer more features for seamless post-production.

The video industry thrives on performance optimization, and NVMe devices offer just the same. Be it on the grounds of speed, efficiency, reliability, or any other performance factor, and you cannot deny the superiority of a 1TB NVMe device. Especially in a professional video processing environment, where data volume is higher, there is no point in settling for anything lesser. The competition is constantly increasing in the industry, and having the perfect storage system is the primary key to enter the race.

If you need more information on NVMe drives and other storage solutions for your business, make sure to check out ProMAX Systems. We offer an array of centralized storage hardware and software for video professionals, teams, and agencies, including NVMe drives, SSDs, asset management, cloud storage, backups, archives, and more.