NVMe vs SSD: How They Differ in Performace, Speed, and Price

In the battle of NVMe vs. SSD, the former provides a latency-free and high-bandwidth storage experience. It is the latest and possibly the best storage solution for an array of devices, offering faster read and write speeds than older solutions.

However, these benefits come at a cost, depending on how you’ll use them. Hence, you need to consider if it is worth paying more for an NVMe set up in many cases.

Keeping this in mind, we have researched the web and sprinkled our personal experiences with storage solutions to write this blog to help you make an informed decision.

What are NVMe and SSD? How do They Differ From Each Other?

To be clear, when we talk about computer storage, we are talking about hard drives. And there are three kinds of hard drives,  SSD, SATA, and NVMe. Each of these works differently. As a result, it gets a bit difficult to choose the correct option.

But worry not! We’ll help you understand how each of these solutions works and how to choose the most cost-effective option for your business.

Firstly, let’s discuss a bit about the evolution of the SSD. Solid State Drive (SSD) has been the most popular hardware item for computers and laptops over the years. Unlike its older counterpart, the Hard Disk Drive (HDD), SSD doesn’t have moving parts. Instead, it uses semiconductor chips to store and access memory.

The most intriguing thing about a SSD is that these chips retain their charged or uncharged state even when you shut down the device, ensuring memory is stored. This allows your desktop or laptop to scan the data within seconds. 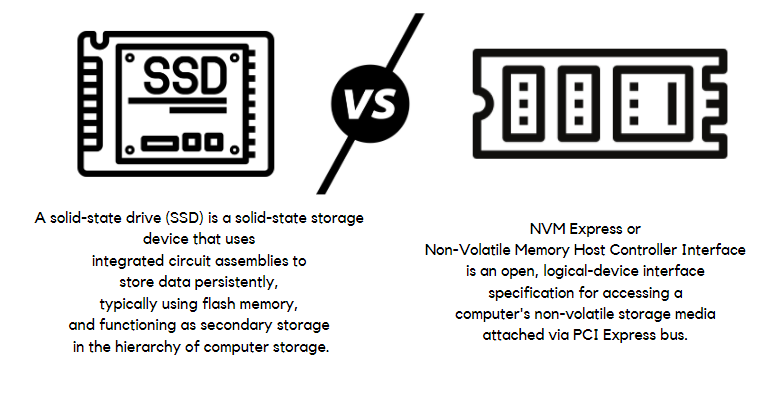 When SSDs were first launched, manufacturers ensured that they fit into the existing HDD slots and bays. As such, they had factors of 3.5 and 2.5 inches. However, more form factors emerged as technology advanced rapidly. Smaller form factors, such as mSATA, PCIe, NVMe, and M.2, that interface directly with built-in slots came into existence. Although these drives also rely on the same working principle as traditional SSD, they have different features, serving other purposes.

NVMe stands for Non-Volatile Memory Express. It is a storage solution introduced in 2013. In this setup, the term non-volatile means the storage isn’t deleted when your computer reboots. At the same time, expressly defines the fact that all data travels over the PCI Express (PCIe) interface on your computer’s motherboard.

Since data doesn’t have to hop through a Serial Advanced Technology Attachment (SATA) controller, it gives the driver a more direct connection with your device’s motherboard, saving you a lot of time while consuming minimal resources. In other words, it’s a technological depiction of the bus, the memory component (SSD) uses to communicate with the computer, and not exactly a new type of memory.

NVMe drives are way faster than SATA. Speeds on enterprise-level NVMe drives can reach 32Gb/s with a 3.9GB/s interface rate. This can be very useful if you do something which requires lots of disc performance, such as gaming or video editing. But with SSD, it isn’t easy to find an exact speed matching your needs as it varies by manufacturer and form factor.

Comparing The Major Features of NVMe and SSD

When we talk about standard SSD, it is an SSD with a SATA interface, a logical interface that connects an SSD via a SATA cable or PCIe to the motherboard (M.2 comes under PCIe Interface). NVMe SSD, therefore, means an SSD with an NVMe Logical Interface in conjunction with an M.2 physical interface or form factor. NVMe is a logical architectural algorithm operating within the SSD and using the M.2 interface to provide the fastest possible data transfer rate. 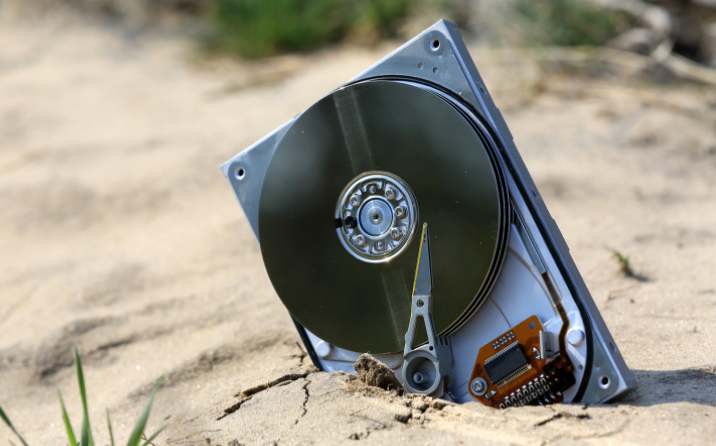 Now that you understand what SSD and NVMe mean, let’s look at the significant differences of both solutions:

NVMe and SSD Performance Base: Which One Is The Best?

SSDs have reached a point where the SATA cable has become a limitation to faster transfer speeds. There are several forms of SSD, and NVMe is one such form. Other SSD formats include 2.5” SATA, mSATA, M.2 SATA, and card-format PCIe. Amidst all of this, NVMe happens to be the fastest.

SATA SSDs are first-generation SSDs and can reach a maximum read speed of 300MB per second, depending on the drive’s condition and fragmentation. Laptops use the most common SATA variant, the 2.5-inch SSD. The modern SATA -III variant offers Read/Write speeds of almost 600 MB per second. Almost all SATA SSDs utilize the AHCI (Advanced Host Controller Interface) protocol to interface between the SATA drive and the computer, which increases latency and bandwidth bottleneck.

NVMe is a newer protocol that allows you to achieve even higher data read and write speeds by operating with optimized efficiency. As per Enterprise Forum, “the fastest NVMe drives, which are usually only available via OEM or too large enterprise customers, read 3 GB/s and write at 1 GB/s”. Mid to low-level NVMe drives offer Read/Write speeds as high as 3500 MB per second. That’s almost five times the performance provided by SATA - III SSDs.

Compared to that of an AHCI controller, the NVMe controller offers lower latency and can process two thousand additional commands to or from the drive. To achieve optimum performance from an NVMe drive, make sure it uses PCIe (Peripheral Component Interconnect Express) as a bus instead of using SATA.

Here’s a quick list summing up the performance standards of different types of SSDs:

When Should You Use NVMe and SSD?

Choosing between NVMe and SSD depends on understanding your requirements. NVMe is generally more expensive than SATA-III. This is a significant problem because SATA-III hard drives are already costly.

NVMe is helpful if you need to work with large files regularly. Hence, video agencies and data-driven industries often prefer NVMe over SATA-III. SSD works best when you don’t need much storage space. For instance, a laptop offering 2TB storage is enough for your everyday needs, such as gaming and storing videos, images, etc. But if you’re building a high-end gaming PC, dealing with vast amounts of data, or making a storage-intensive server and don’t have a budget constraint, we highly recommend that you choose an NVMe drive.

While SATA is cheaper than NVMe, older computers mainly use this technology. On the other hand, NVMe is a new protocol that allows high performance, low latency, and massive storage space.

If you are on the lookout for a faster, more responsive storage solution, you’ll want to check out the available NVMe options. It might be expensive, but the investment is worth it. With innovative solutions like NVMe-oF (NVMe Over Fabrics) and Parallel I/O, NVMe storage’s dominance widens to more than just one application.

We hope this detailed blog helps you understand the nvme vs. ssd differences. If you need a storage solution for your business, make sure to check out ProMAX Systems, offering an array of centralized storage hardware and software for video professionals, teams, and agencies, including NVMe drives, SSDs, asset management, cloud storage, backups, archives, and more.