Why does video storage cost so much?!

So I've been on the creative cow forums the other day and I saw someone asked a really good question.

Why is video storage so much more expensive than other stuff? They're looking at some QNAP and Synology products, and they were also looking at the video players in the market and were wondering why it was 7 to 8 times as expensive.

I'm going to post my response below. This should help you understand the scope of the industry and why there is such a big difference between the pricing of these products. Check it out!

Here was the original question posted on creative cow: 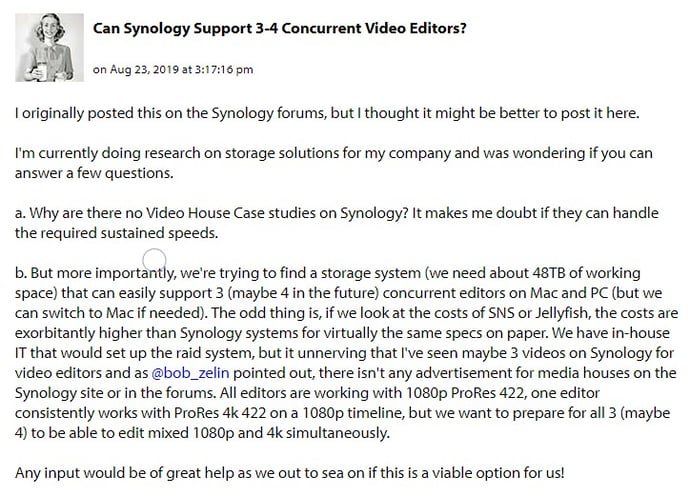 Immediately my mind jumps to this Meme

I jumped in and added my response to the thread, you can check that out here:

From 2000-2008ish it was legitimately difficult to make shared storage for video teams work.  I cannot tell you the amount of hours I spent checking firmware and jumpers on individual drives back then… hundreds if not thousands.  Getting systems to work "well enough" was a huge deal & commanded a $50k price tag to anyone who wanted shared storage.  Back then, there were very few competitors, maybe 6 of us.

From 2008ish-Now, other people/companies saw a technology space with an interesting niche & more vendors came along.  More vendors + maturing technologies = Expand capabilities - or - Lower Prices.  Without any notable exceptions, video vendors expanded product capabilities because no one wanted to lower the price.  As an example, this is why most of the products on the market have a 'MAM' option.

Around 2010 system design shifted from SAN to NAS.  If you want that geeky history lesson, I did a video blog on it at https://www.promax.com/blog/why-video-editors-switched-from-san-to-nas

All the while NAS vendors Synology & QNAP both built companies focused on SMB/surveillance/home networks.

Around 2015, switches/NIC/Drives/internal components became faster and less expensive. These factors allowed QNAP & Synology to start getting the performance needed for smaller video teams.  So people started buying those brands because for the 1st time there was an option that wasn't super expensive (relatively speaking).

Both QNAP & Synology have 3 advantages that none of the video focused vendors have.  1) Economy of scale, both companies in the 250-500 headcount range, vs the 10-25 range of most of the video vendors.  2) Lower cost of employees, both are based in Taiwan.  Not a bad thing, but employees in Taiwan are about 1/4th the cost of employees in the US, where most of the video vendors reside.  3) Professional video is an adjacent market, not their focus.  This means, they can sell at much lower margins and it's still a win for them.

Meanwhile, video vendors have not changed their pricing model because they sell enough in corporate/edu/gov't where pricing is not the same factor as for a smaller agencies/groups. These markets will often pay 7-8x for better support / a few extra bells & whistles (especially when it's your budget, not your money).  Let’s be honest here though, big organizations are usually lagging adopters of what works for the smaller, agile, teams that are willing to try the new stuff to make things happen. When a product works, it tends to “fall up” into the bigger companies as reputation and word of mouth spreads. The big companies just want stuff that works, and they wait until the small business owners prove it so they don’t have to take the risk. We can and do play in that market, and it’s interesting and challenging in it’s own way, but it’s not where the real fun is.

The main reason that ProMAX exists in this industry (and have since the mid 90’s) because we love the technology side of the creative space. As it became apparent that the small/medium sized teams (where most of that really cool stuff happens) have moved to generic IT tools due to pricing, we knew we needed to change.

At first we were a little bummed to admit to ourselves that the we’d gotten complacent and the market responsible for our success for the last 20+ years had begun to move on without us…But, then we shook it off and looked at what we could do with the new technologies and pricing out there and said screw it, we like you guys and we can do better. So we decided to burn down the old pricing model and keep making cool stuff for the creative teams at prices that actually make sense, and with us, you can get a system tuned specifically for video performance, built and supported directly by a team who’ve actually worked in our industry for a few decades now. We think it’s a solid offer. You can learn more at http://info.promax.com/new-video-storage-products