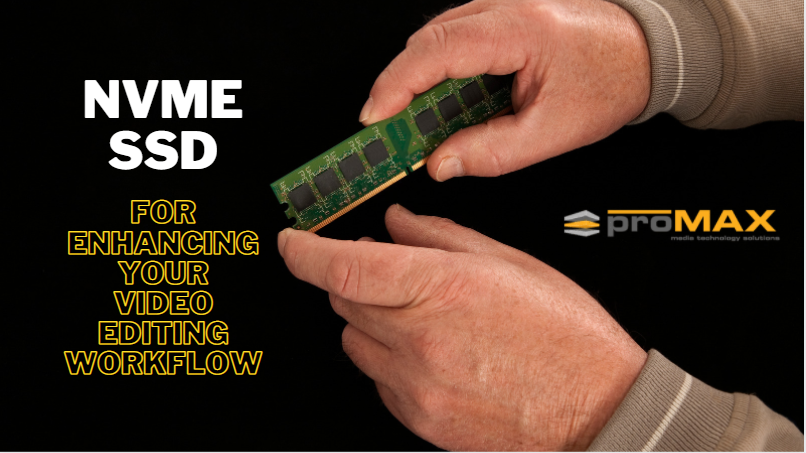 Speed plays an uncompromising role when talking about high-end video editing. No one wants to deal with frozen screens or tens of hours of delay while exporting video files. Other than saving a ton of time, faster processors also ensure that the editing workflow runs seamlessly.

Amongst the three storage devices, the best NVMe SSD devices are priced the highest. It is reasonable for some apparent reasons. It uses the latest technology to offer users the best performance, six times the speed of the fastest SSD out there and humongous storage space.

NVMe drives are the latest successor of evolving hard drives. Using a minimum of four PCIe lanes, NVMe offers the fastest processing speed amongst the three; and is thus preferred by the industry’s best professionals.

NVMe is a no-brainer choice for your ultimate storage device if you’re seeking the latest high-end features that complement your skill at editing. In this blog here, I’ll walk you through the best NVMe SSD to enhance your video editing workflow.

Non-Volatile Memory Express or NVME SSDs were introduced in the year 2013. Unlike other forms of SSDs, the storage in NVMEs is not deleted even when a computer reboots. NVMe uses a PCI Express interface on a computer’s motherboard that enables better data flow. Although the NVMe uses the same principles, such as a traditional SSD, they offer better performance and boast a set of distinct features. 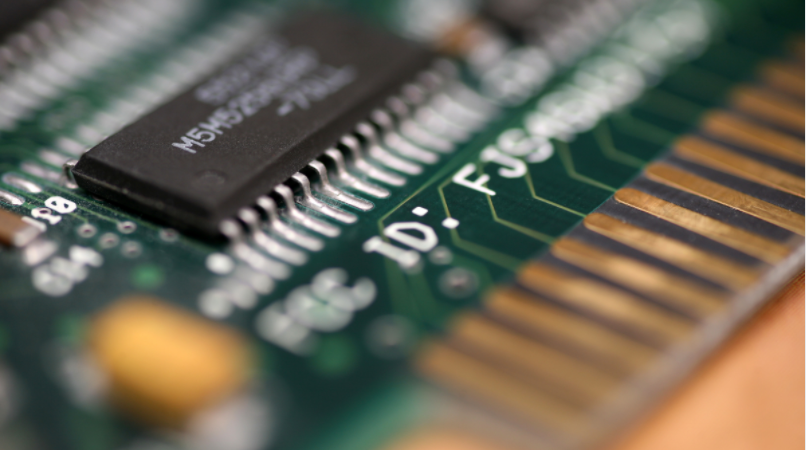 Volatile Memory is found in the RAM and GPU’s VRAM systems, which are constantly written to and read from. Whereas, Non-Volatile Memory remains unchanged irrespective of power supply. They are used for long-term storage of data, rather than short-term management and cache by the CPU or GPU.

When programs are run on the computer, uncountable temporary files are stored in tiny data packets. For your computer to perform these tasks faster, your system must read and write these data packets at the highest speed. Best NVMe SSD drives have surpassed all the other peers at this test.

Since the SSDs have replaced the old and out-of-fashion HDDs, it has long since relied on passive spinning wheels to read and write data. Irrespective of the upgrade, SSDs are outperformed by NVMes because of their technical limitations compared to the next-gen technology-based NVMe SSDs. Unlike every other storage device, NVMe SSDs are compatible with various form factors.

Compared to other forms of storage, NVMe technology is blazing fast, which is one of the primary reasons why it has grown in popularity among video professionals. NVMe offers incredible read and writes speeds, way faster than conventional HDDs and SDDs. Unlike other solutions, NVMe has the potential to playback multiple streams, that too, without any frame drops or lags, thus ensuring a highly workable environment. In terms of rendering, NVMe is light years ahead of its counterparts.

In case your current video-editing setup slows down the exporting process or freezes while working with larger raw files, it is time for you to upgrade to the best NVMe SSD drives.

The ultimate video editing system must process 4k and 8k without using much of the CPU’s processing power. As NVMe SSDs are cloud-based storage, we need to understand the term in detail. In its simplest form, Cloud Storage is the type of storage that can be accessed from anywhere at any time. 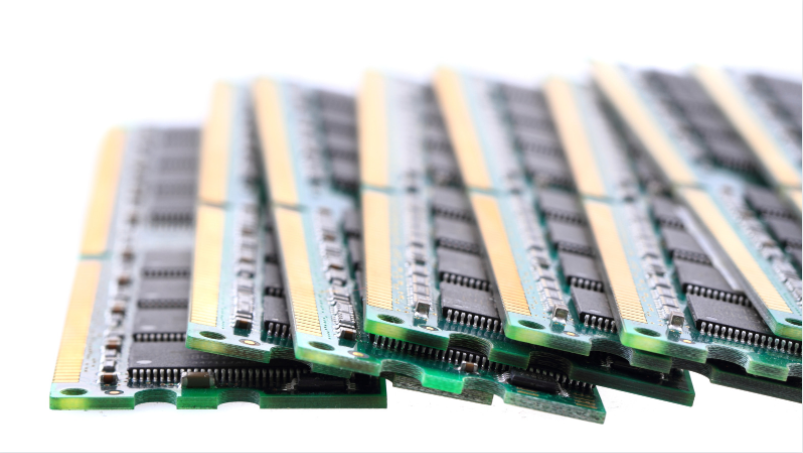 NVMe SSD is the superior form of storage as it is versatile and more accessible. If you’re in the video editing industry, the need to expand the storage capacity is forever unfulfilled, and this is where cloud storage saves the game. You don’t have to spend money every time you need to expand on storage as the cloud offers you unlimited space bought anytime from various cloud vendors.

The latest PCIe III bus comes with up to 16 PCIe express lanes which collectively offers a speed of up to 1 GB/ second. With this capacity, the best NVMe SSD drives can intake over sixty-four thousand commands at a time. To read in-depth about the features of NVMe SSD drives, check out our previous blog: Why Pay Extra For NVMe Drives Over Other Drives?

By utilizing multiple PCIe lanes, NVMe SSD drives enable users to work at least six times the speed of general SSDs on the market. Better the speed, lower the lag at processing and exporting of highly complex video files. It saves you a lot of time, doesn’t take a toll on your patience, and lets you edit in focus.

NVMe SSD Advantages From Its Competitors

Modern SSD drives boast a standard that limits their speed to the capacity of flash memory. In contrast, NVMe drives allow the flash memory to run through utilizing multiple PCIe express lanes. These lanes offer higher bandwidths owing to their compatibility with the processing unit (CPU).

As discussed earlier, NVMe SSD drives can process up to sixty-four thousand command queues, whereas to deliver high performance, a system’s protocol requires only about thirteen to fifteen commands. These drives are designed keeping in consideration the highest demanding tasks of the near future. The interface is the perfect fit for extreme scalability for the demands of next-gen tech upgrades.

As the PCIe lanes are placed right on top of the central processing unit, NVMEs are not affected by ATA restrictions. This factor enables NVMEs to offer at least four times the I/O operations’ speed than the fastest rival in the scene. Compared to 600 MBps of the fastest SATA SSD drive, the best NVMe SSD drives stand proudly at a read-write speed of over three times, at 2000 MBps.

NVMe is a storage interface protocol that connects between the storage interface and the system CPU via high-speed PCIe connections, regardless of the storage form factor. The third-generation PCIe bus has up to 16 lanes and data transmission rates of up to 1 Gbps. A single PCIe slot can be configured with one, four, eight, or sixteen lanes, considerably boosting the performance of your video editing computer. The PCI Express standard, PCIe 3.0, provides a maximum transfer speed of 985 megabytes per second (Mbps) on each path. NVMe drives can utilise up to four PCIe lanes, resulting in a theoretical max speed of 3.9 Gbps (3,940 Mbps).

Get a more detailed comparison between SATA/SAS-based SSD drives and the best NVMe drives on our recent blog.

How can we help your creative team?

Learn how to improve your media management practices, Click below to speak with an expert today


Talk to an Expert Now!

NVMe drives include an architecture that offers a drastic advantage over your regular SATA and SAS protocols, which accelerates the efficiency and performance of the existing applications. This is very relevant for videographers as they often work with high-performance programs and applications.

When stressing over the choice between which storage device to pick for optimal video editing experience, we at ProMax Systems highly recommend the fantastic NVMe SSD drives. In no way, the competitors in the market stand beyond the capacities offered by the best NVMe SSD drives.

With its faster processing power, high reading-writing abilities and cloud storage, it is the ultimate choice for professional video editors and experts alike. For updates and detailed discussions on further developments on storage devices or other burning issues in technology, make sure that you follow ProMax.

As Chief Operating Officer of ProMAX Systems, Nathaniel Cooper, runs ProMAX Systems day to day operations. Cooper has been working with Storage, Backup and Media Management for video and creative professionals since 2001. Cooper has lead the design and deployment of some of the largest media systems in the world including a range of customers from NFL, MLB & NBA teams, US Military operations, and many of the worlds largest PR agencies and consumer brands. Cooper has spent the last 9 years as part of the ProMAX team and specializes in translating complex technical issues and options into easily understandable concepts.

Video editing is no easy task. It needs the perfect balance of creativity and technical expertise. The entire post-production ...
Start Reading