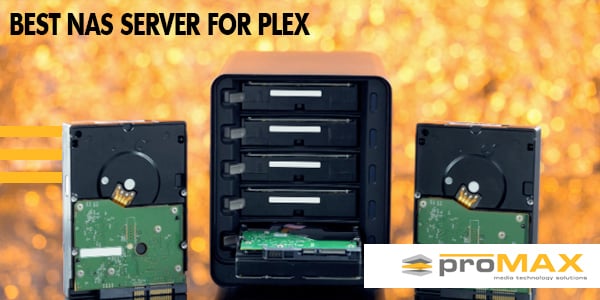 We were big Kodi fans until making the switch to Plex in 2018. The most significant advantages of Kodi were plugins and customization. Plex, on the other hand, is simpler to manage on client devices, is remotely accessible when traveling, can be shared with friends, and allows for quicker library sync. Despite adding free, legal streaming material, podcasts, and live over-the-air television to Plex's feature set, its server capability remains at the center.

Plex is a popular option for people wishing to set up their own home media server. Plex Media Server enables you to host and broadcast your music, movies, programs, and other media in one spot. If you already have a large collection of bought media, using a home NAS server to handle this service is a terrific way to save money.

A powerful server is required to get the most out of Plex. However, a decent enclosure would suffice. It is feasible to make your own, which is the preferred way for individuals with the necessary skills.

However, if you don't know what NAS server to get, don't worry. In this article, you'll discover some of the finest NAS servers along with how to choose the right one. Let's get going!

What Defines A NAS Server?

A network attached storage (NAS) device is a cloud storage device. Data on a NAS are available both inside and outside of the network. It's similar to a server but more self-contained. A NAS box, for example, is often a pre-built system that includes a CPU, RAM, and external hard disk bays. Network attached storage devices often have non-upgradable CPUs and restricted RAM. Memory can sometimes be upgraded.

Many NAS systems like QNAP and Synology have a unique operating system, but a DIY server may have a Linux distribution (distro) installed. Most NAS devices emphasize a simple setup. A server performs the same function as NAS enclosures, although servers often come in more conventional desktop formats or rack-mounted server footprints.

A NAS unit will often have higher computing power, memory, and upgradeability. However, servers are frequently less user-friendly and more expensive.

Consider Plex to be a DIY Netflix or Spotify. Whereas streaming providers like Netflix, Hulu, and Vudu host the material, you give the movies, TV episodes, and music files using a media server. Plex then organizes your collection with metadata and package art, allowing you to view your films, series, and songs practically anywhere on every number of devices.

On the other hand, Plex has introduced several cord-cutting capabilities, including ad-supported free, online streaming movies and programs, the option to utilize an OTA antenna for live TV and DVR capability, and web shows and audiobooks. As such, it's one of the greatest cord-cutting applications. To get started with Plex, you'll need a library of films, series, and hip hop albums, which you can get from the Plex server and Plex client.

A wide variety of choices are available to you if you are looking for the best NAS for use with Plex. You can select entry-level selections with either one or two drive bays, or you can go with more durable versions with four drive bays. Some of the best NAS solutions for Plex are:

A video editing team isn't complete without shared storage, but it isn't the only way to collaborate. Platform is designed as an all-in-one solution for media asset management, archive, and safe media backup was built for creative teams of any size or scope.

ProMAX Platform's high-performance video storage solutions provide everything you need today. In order to keep up with the ever-expanding demands of your company, your Platform evolves with it. Users can edit and collaborate from home just as they would in the office with this desktop-sized server, which is available in storage capacities of 0TB, 2TB, 4TB, and 8TB. Platform users may combine their distant users with their current storage easily and seamlessly.

Data encryption has also been included in ProMAX's data storage servers. In terms of drive bays, ProMAX offers 16- and 24-bay storage servers with speeds of up to 5500 MB/s (on SSDs) and a long-term commitment to video performance. The Intel Xeon (dual-core) 2nd generation, 24 core, 32 GB of RAM, and a graphics card, are housed inside the chassis of the 16-bay.

The Synology DS920+ is the finest NAS server for Plex. Because it has four hard drive bays and two built-in M.2 2280 NVMe SSD slots, it enables you to fill up a substantial amount of storage while also providing a significant amount of cache acceleration through the solid-state drives.

It utilizes AES-NI hardware encryption and is powered by an Intel quad-core CPU. There is 4GB of DDR4 RAM already installed in the system, which can be increased to a maximum of 8GB. Even though it only has a fourbay NAS, the Synologys diskstation DS920+ can be expanded to accommodate a staggering nine discs if you purchase the extra Synology DX517.

TerraMaster is a premium brand of NAS and associated accessories that provide a large selection of high-end solutions that provide exceptional performance, such as its NAS for Plex.

The TerraMaster F5422 NAS for Plex is the finest solution in this listicle for heavy-duty use. Starting with storage, it has a total of 5 drive bays and support for a solitary caching SSD drive. The nicest thing about this Plex NAS is that, depending on your RAID setup, you may achieve transfer rates of up to 670 MB/s. Regarding RAID setup, this Plex NAS supports most of the usual ones, including RAID 0, RAID 1, RAID 5, etc.

Regarding the processor, this NAS depends on the Intel Celeron J355, a quad-core CPU with a 1.5 GHz base and 2.3 GHz peak speeds. Unfortunately, although you receive 4 gigabytes of RAM that can be expanded to 8 gigs, it is DDR3 rather than DDR4. Thus, performance is significantly reduced.

The Synology DS220+ media server is a reliable Plex server and the finest Synology NAS for Plex. A dual-core CPU with AES-NI encryption is included. It can handle two simultaneous H.265 or H.264 4K to 1080p transcodes on the streaming front.

This Synology NAS features 2GB of RAM that can be expanded to 6GB. Depending on the amount of RAID, the two HDD bays may hold up to 32TB when running twin 16TB drives. The DS220+ is an economical alternative for a Plex NAS.

The Intel Celeron J4025 Dual-core CPU is capable of numerous 1080p transcodes and even 4K transcoding. However, its 2GB of RAM may disappoint heavy users. Similarly, sophisticated features like SSD caching and an eSATA connector are not accessible. A 1GbE LAN port and three USB 3.0 connections, on the other hand, provide good expandability.

The QNAP TS253D4G is a two-bay NAS built for corporate and residential customers that want high-speed connection and expandability. The TS-253D is one of the finest in the market, powered by a powerful 2GHz Intel Celeron J4125 quad-core CPU.

Plex is a terrific method to build your own media collection and broadcast movies and TV programs from it. You won't need to utilize platforms like Netflix or Prime Video after setting up a Plex server. However, to get the best NAS server for your Plex client, you'll need to look for the following things in the NAS server:

As with a PC, the CPU processor on your NAS manages all requests for file access. You could even experience latency when streaming movies from the NAS when the CPU isn't up to speed. Therefore, quad-core processors like Intel Celeron J4125 are preferable to dual-core processors like Marvell Armada 7020 in terms of performance.

If you want to build a Plex server with a large storage capacity, examine the total number of drive bays given by your NAS because that is the variety of drives you can put within it. A 2bay NAS device won't do you good because most NAS for Plex includes 4 or 5 storage drive bays, which should be plenty in terms of storage space and redundancy drives.

Many NAS machines are designed to operate heedlessly, while others have an HDMI output and may function as a home theatre PC (HTPC). You can view movies on your Plex server by connecting it to a television or projector, or you can utilize the HDMI output to control your NAS rather than signing in from a computer connected to the internet.

Another thing to consider before purchasing a high-performance NAS for Plex is the RAM capacity. A 4 GB DDR4 RAM storage NAS would perform much better than one with 4 GB DDR3 or 2 GB DDR4 RAM since more RAM capacity enables seamless streaming playback.

You will also need to choose whether you wish to have a NAS box or a server to store your data on. Even though both devices can run Plex, a network attached storage (NAS) unit is often more streamlined, user-friendly, and compact than a standard server that takes the shape of a desktop NAS. Traditional servers also typically have superior CPUs.

While you may get a sense of your NAS's Plex efficiency by looking at its CPU, RAM, and disc bays, you should still verify the specific transfer rates it supports. Fortunately, the greatest speeds provided by your NAS for Plex will most likely be restricted by the NAS drives themselves since most NAS drives have high-speed connection choices such as 2.5 GbE, 5 GbE, and then even 10 GbE Ethernet ports.

If you like watching movies or TV programs at home through streaming services, chances are you've heard about Plex. It enables you to construct your broadcast library at home, eliminating the need for third-party services. You need a NAS server to stream the movies from Plex. And we hope that you've found the right NAS server after reading this article.