How to decide on SAN vs NAS for your Data Storage 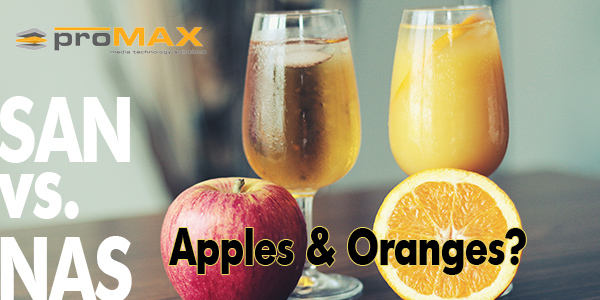 The story of two of the most popular storage architectures. NAS and SAN are as complementing as they are vying for market share and serve diverse needs while presenting usage options to the organization. Most big organizations utilize both.

Even so, not every IT company holds the budget, and they need to optimize their storage architectures and expenditure to suit their priority requirements. Here we’ll present you with the usage cases, distinctions and cite in-depth details of NAS and SAN.

NAS is a data storage device on the file-level attached to a TCP/IP network, mostly Ethernet. It generally uses CIFS or NFS protocols, though options like HTTP are also available. Considerably they are the simplest storage networking to implement, and based only on budget limitations, are scalable to an unlimited degree.

To the operating system NAS appears as a shared folder, consider it as a specialized type of file server. Users can access NAS files like they would access any other file on the network. An important shortcoming of the NAS is it’s LAN dependent, so if the LAN goes down the NAS does also.

NAS speeds are not as fast as block-based SAN, though if high-speed LANs are utilized, they can beat most latency and performance issues. NAS storage can give you terabytes (TB) of storage space which can be easily accessible on standard Ethernet connection. Typical usage of NAS is data storage, backup, and file sharing.

SANs are the predominant shared storage solution, a core asset of most big enterprises. SAN is a dedicated consolidated block-level storage with a high-efficiency network. The network consists of interconnected storage devices, switches, and hosts. SAN directors are also present in high-end enterprise SANs for high speed and proficient capacity usage.

SANs now feature faster networks, solid processors and solid-state drives. Using host bus adapters (HBAs) the servers connect to the SAN fabric. The most important aspect of a SAN network storage is that the servers identify the SAN as locally attached storage accomplished through different virtualization techniques, and as a result, multiple servers can share the storage pool. They are LAN independent, so the pressure is alleviated on the local network by offloading data directly from attached servers. SANs general use cases are data mirroring and high-speed server transactions.

NAS utilizes TCP/IP networks, usually Ethernet. Classical SANs run on Fibre Channel networks that are high-speed. More recently though SANs are embracing the IP-based fabric due to the complexity and cost of Fibre Channels. The core requirement of SAN remains to be high-performance, flash-based fabric protocols for assisting to bridge the gap between FC and slower IP speeds.

NAS directly connects to an Ethernet network to an Ethernet switch through a cable. NAS can utilize several protocols to connect with servers consisting of SMB/CIFS, NFS, and HTTP. While on the SANs part, servers connect with SAN disk drive employing the SCSI protocol. The network is designed using SAS/SATA fabrics, or by mapping layers on other protocols like Fibre Channel Protocol (FCP) that maps SCSI on top of Fibre Channel or iSCSI that maps SCSI on TCP/IP.

Modern NAS is also highly scalable up to terabytes or petabytes utilizing the scale-out nodes or cluster, but generally, entry-level NAS devices are not highly scalable. Contrary to this, the scalability is a prime factor and driver of a SAN system. SAN architecture enables admins to scale capacity and performance in scale-out or scale-up configurations.

SANs are famous for their high-speed performance designed and utilized for environments that require high-speed traffic flow like e-commerce websites and high transaction databases. NAS, on the other hand, usually have a lower throughput and high latency due to its sluggish file system layer, but modern high-speed networks can make it up for the performance losses within NAS.

By and large, a NAS is less expensive to purchase and maintain. Though if you opt for a high-end NAS it will cost probably more than an entry-level SAN. NAS devices overall are reviewed as appliances with little software and hardware managing components compared to SAN. The administrative cost of a storage system also plays a part in the equation. SANs are complex architectures with FC SANs on top of the complexity layer. A general rule is to add an annual maintenance cost of 10 to 20 percent in the calculation.

In the NAS vs. SAN comparison, the NAS is the victor in ease of management. It provides a simplified management interface and plugs easily into the LAN connection. SANs, on the contrary, require much more management time and effort. SAN deployment in many cases need physical changes to the data center, and centralized admins are required for ongoing management.

NAS use the following techniques for backup: Traditional network-based backup techniques which is a usual client-server backup. The Network Data Management Protocol (NDMP), wherein simple terms backup server interconnections candidly with a NAS appliance, backup that permits a NAS device to send data to a tape device or backup server without backup client intervention. NAS-based data replication provides considerably the most advanced features and the best integration with applications. This can be substantially beneficial to use local and remote replications as provided by the ProMAX platform for video storage solutions.

SAN allows for more swift backups due to its transparent nature of SAN to the client OS. Which won’t give rise to bottlenecks during backups. As well as replicating your data to an offsite SAN location is made easy. You can replicate the recovery rapidly and set up your environment. This is important because downtime is expensive. On SAN you can perform a backup through image copies by using mirrored disks, disk-to-disk backup, serverless backup using E-copy protocol, and LAN-less backups.

NAS and SAN technologies merge through newer techniques that overcome incongruities between the two. SAN with Fibre Channel is robust yet also expensive, tough to manage and complex. iSCSI and Fibre Channel over Ethernet FCoE have substantially reduced the difficulties by encapsulating SCSI commands into IP packets for better transmission over an Ethernet connection, which let SANs function within a LAN instead of needing a discrete SAN network.

Rather than two distinct networks – for user communication an Ethernet LAN and an FC SAN can be used for storage. This allows an organization to utilize its existing awareness and infrastructure for both LANs and SANs. Together with unified storage, this allows file and block storage through NAS appliances.

The convergence of the two technologies enables simple file sharing to be done through inexpensive, scalable NAS, preserving the considerable high bandwidth of SAN for where it might be needed. All these assist in better snapshots, backup, and scaling abilities.

Selecting the right storage option for your organization certainly goes down to determining which network criteria are more important for you. After you determine which factors are crucial for your operations, it’s easy to compare and find the one fitting.

Want to see some action? Watch this video on Shared Storage for Video Teams

Want to learn how to improve your media management practices? Check out some of our most popular blogs or click below to check out our YouTube Channel.