SSD vs HDD: How to Choose the Right Drives for your Video Team 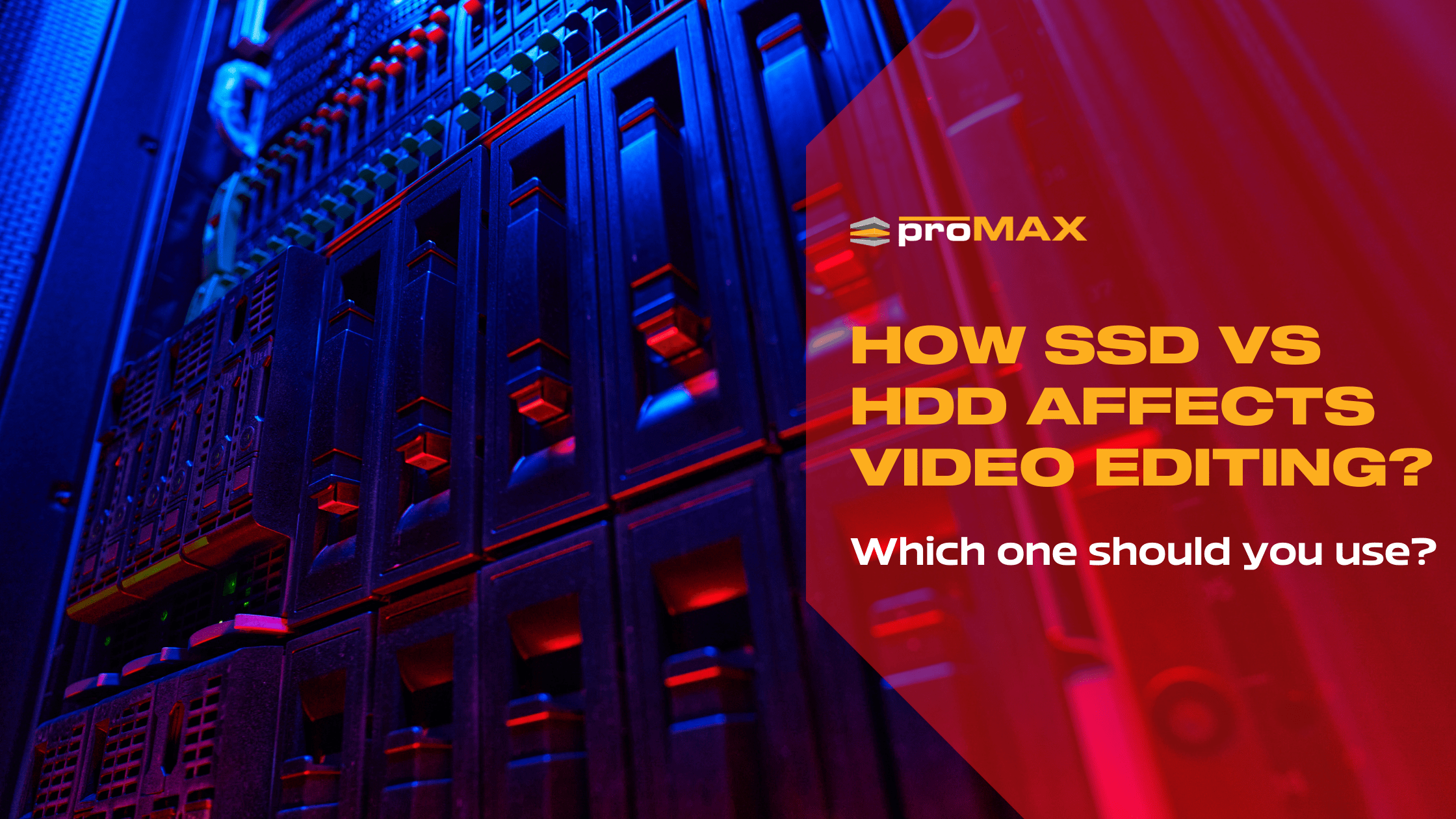 Video production teams know firsthand that speed is key to their success. Creating high-quality content and hitting deadlines can be the difference between a thriving business and closing up shop.

Brands are realizing the power of video to grow their business and are hiring video production teams to create more video content than ever before.

At the same time camera technology has continued to evolve making 4K and 8K footage almost standard for the industry.

Between the volume of video content being created and the large file sizes that come with 4k and 8k footage, video teams need high-performance drives and storage systems for their desktop computers to continue operating smoothly.

Why Is Picking the Right Drives Important for Video Editing?

Let’s start by explaining how a traditional hard drive plays into a video production workflow. After the footage is captured on camera it needs to get onto a computer for a video editor to do anything with it. That footage needs to be stored somewhere

There are two main types of storage drives available for video editors to use, Solid State Drives (SSDs) and Hard Disk Drives (HDDs).These can come in several different form factors and be used in a variety of different storage devices. Let’s dive in and compare the advantages and disadvantages of HDDs and SSD so you can make the best choice based on your video editing needs.

SSD vs HDD: Which is Best for Video Production?

When choosing between SSD vs HDD for your video production team, performance should be a major factor. The speed at which your drives read and write data can provide impressive gains in productivity and efficiency for your video editors. For syncing files, data transfer speed can also be impacted by choosing between solid state drives or a traditional hard disk drive.

Another aspect of performance between HDD vs SSD are boot times. SSD drives store some data in flash memory which enables much faster loading time than traditional hard drives which need to spin up before accessing your data. 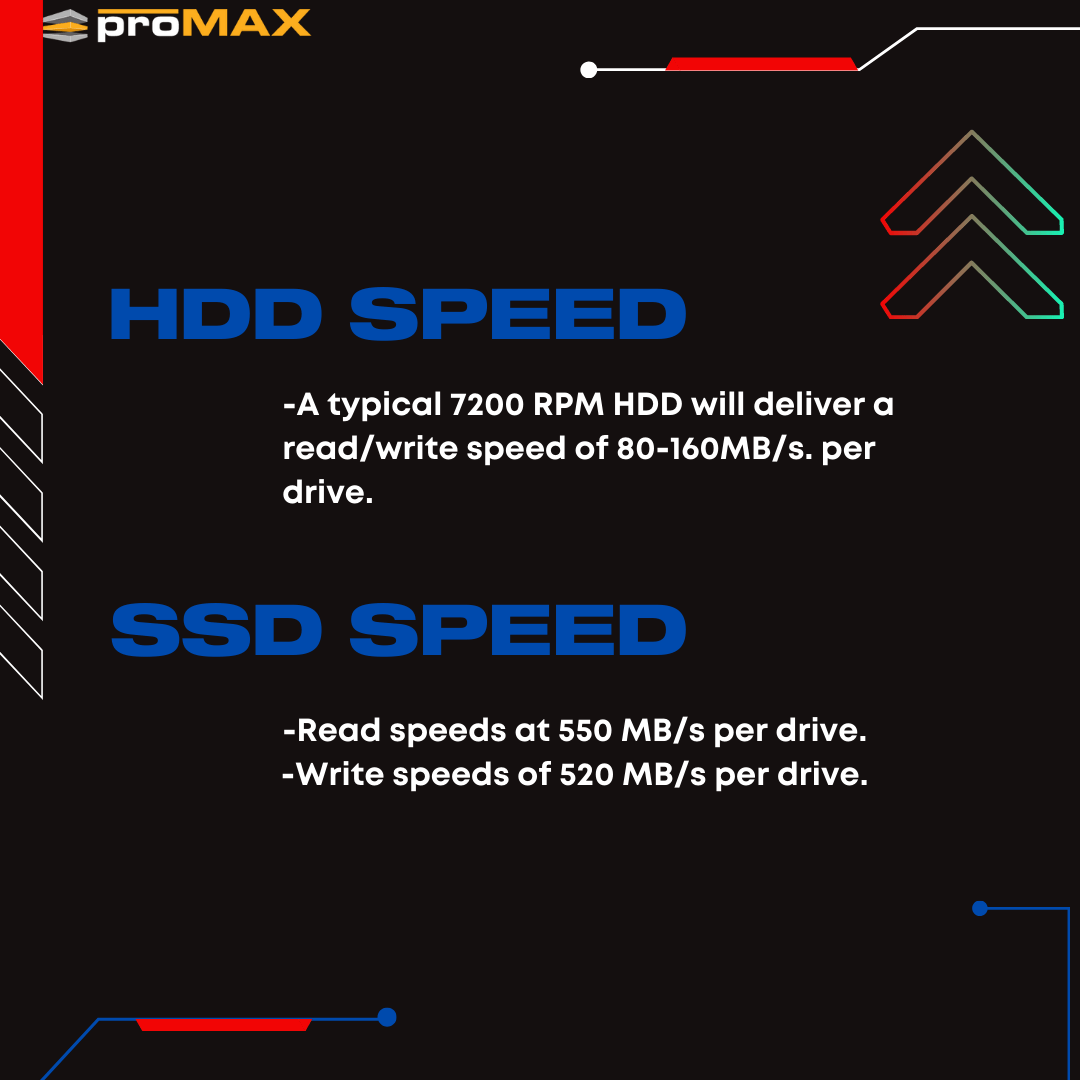 When we compare SSDs and HDDs from a performance angle, it’s pretty clear who the track star is here.

Second to performance, video editors need drives that they can rely on. Your drives should be able to withstand the workload placed on them without the risk of losing the valuable data stored on them.

SSDs have a longer lifespan compared to HDDs. Because they contain moving internal parts, HDDs are likely to fail sooner and have a lifespan of 5-10 years compared to SSDs that have a 10+ year life expectancy.  While SSDs do have a finite number of P/E (programmed and erased) cycles, they have software that can alert you to potential failure and help you prevent permanent data loss, whew!

Even though we don’t imagine you’re throwing your drives around, accidents happen! HDDs are fragile and susceptible to breaking if they are dropped even a short distance while SSDs can absorb shocks much better. SSDs stand up much better to extreme temperatures and can’t be erased by magnets which HDDs are vulnerable to.

If reliability is key, SSDs are the way to go. 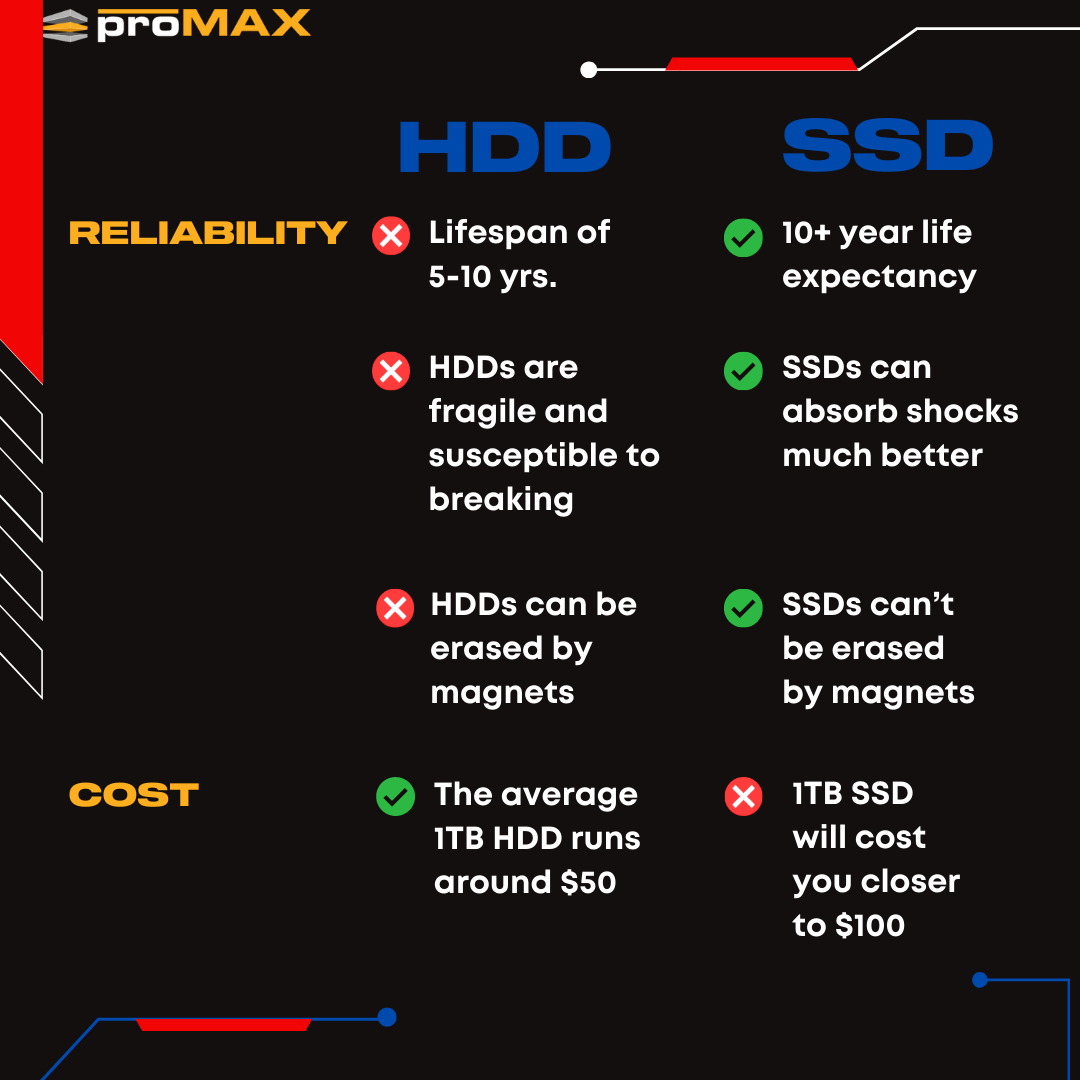 Budget is always a consideration when it comes to purchasing new hardware. When it comes to cost, SSDs do tend to be more expensive per terabyte. The average 1TB HDD runs around $50 while a 1TB SSD will cost you closer to $100.

If you are trying to maximize your storage capacity and HDD speed is acceptable for your needs, a traditional hard disk will be your best option.

Click here to compare SSD vs HDD Costs and Performance →

Choosing the Best Storage Solutions for your Video Editing Team

Once you’ve picked between SSDs and HDDs you need to decide what type of storage you are going to use. You’ve got a few options to choose from here:

External drives are a good option for a single editor on a budget but if you are working with a video production team we recommend staying away from them. There are a number of external SSDs and external hard drives on the market from companies such as Western Digital.

If your video editing workflow requires sharing files with other people, external drives will leave you stuck using what we call the ‘sneakernet’ where you are literally walking or mailing drives to the rest of your team. You’ll get your steps in but your projects are going to take much longer to finish.

Additionally, expanding your storage capacity means buying a new external hard drive and once you start buying more of them, finding the files you need becomes a plug and play nightmare.

Redundant Array of Independent Disks (RAID) devices allow you to store data over multiple hard drives. You can use HDD and SSD for these systems. RAIDs can reduce your chances of data loss and provide improved read and write speed performance depending how you configure the device.

While RAIDs provide more storage and data protection than an external drive most of these devices are not optimized for video performance which can result in a choppy editing experience and a frustrated editor.

Network Attached Storage (NAS) provides video production teams the most performance and storage capacity. These systems come in various sizes, we offer 16 & 24 bay options that support both HDD and SSD storage and work on both PC or MAC workstations.

NAS systems will have an array of internal SSDs or HDDs to provide a large amount of storage. These servers can utilize SATA SSD or NVMe SSDs to provide read and write speeds much faster than a hard disk drive.

The beauty of NAS storage is that it allows multiple video editors to access the system at once and access files at the same time and can be optimized for video production.

Video specific NAS Storage servers can also utilize high-performance processors like the AMD Ryzen and graphics cards such as the Nvidia RTX. This provides a visual experience that is comparable or even surpasses high-end gaming laptops or gaming consoles.

Choosing the Drive Type for your Video Editing Team

When it comes time to decide between SSD vs HDD for your video production team it ultimately comes down to performance and your budget. If you decide to go with SSDs you’ll pay a bit more per terabyte but your editors will have faster editing performance and a more reliable drive. On the other hand HDDs will save you some coin but run the risk of slow performance and potential drive failure.

Still not sure whether SSDs or HDDs are best for you? Click below to book time with one of our video storage experts today!

As Chief Operating Officer of ProMAX Systems, Nathaniel Cooper, runs ProMAX Systems day to day operations. Cooper has been working with Storage, Backup and Media Management for video and creative professionals since 2001. Cooper has lead the design and deployment of some of the largest media systems in the world including a range of customers from NFL, MLB & NBA teams, US Military operations, and many of the worlds largest PR agencies and consumer brands. Cooper has spent the last 9 years as part of the ProMAX team and specializes in translating complex technical issues and options into easily understandable concepts.

Because of their lack of internal moving parts, SSDs will last longer than HDDs which consist of a spinning disk and a platter ...
Start Reading
Matthew Mister Jul 29, 2019 2:12:53 PM < 1 min read

How do SSDs & HDDs impact rendering?

The type of drives you use play a big part in your video performance, but is that true across all the pieces of the video ...
Start Reading
Nathaniel Cooper Sep 13, 2019 9:00:00 AM 1 min read