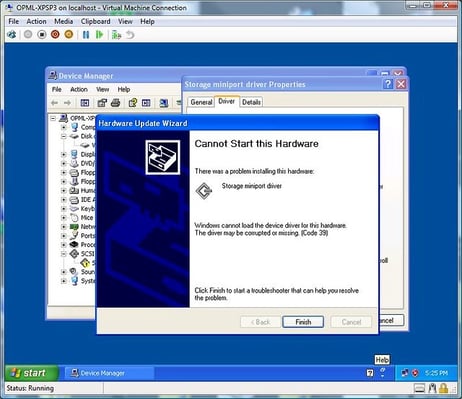 There’s nothing more frustrating than seeing your computer flash “hard disk failure” when you’re working on something important.

A hard drive crashing can be catastrophic. Unlike solid state drives (SSDs), hard disk drives (HDD) are much more susceptible to crashes or failures as they have moving parts. While hard drive failure rates are decreasing, with tech watchdog Backblaze reporting a 1.25% annual failure rate, it still happens.

There are a host of reasons why hard drives take a nosedive. From overheating and a bad power supply to corrupted files and cyber crime, your storage is one of the most vulnerable parts of your computer. That’s why you should always do a regular backup of your data.

Knowing the reason behind a failure is paramount as it can guide you on how to deal with it. In general, you can divide the types of HDD failures that end up in data loss into three categories:

Hardware and physical problems relate to the condition of the drive itself. For example, overheating is a recurring hardware problem. Meanwhile, manufacturing or firmware faults are easy to spot as they often occur in new computers or newly installed incompatible hard drives. You should always be ready for hardware failures, as demonstrated in a video from Nathaniel Cooper. Mechanical failures are accompanied by a black screen and sometimes random clicking sounds from the drive.

Excessive heat, water damage, static electricity, impact, and power surges are also physical problems that might be causing the hard disk to fail. In the case of the reasons above, you might want to contact the manufacturer if the computer fails to start.

As mentioned above, HDDs are more vulnerable to mechanical failure than SSDs. But it doesn’t mean that the latter is fail-proof. While SSDs lack the spindle and platter that constitutes an HDD’s weakness, the “blocks” where the data is stored can also wear out. External hard drives are worse, as they have less protection than those nested in computers.

Software problems, on the other hand, are far more complex. Firmware failures, for one, at least have mechanisms in place that would tell you your disk has been rejected, and that you should contact the manufacturer. Wrong and buggy OS installation or malicious software can also cause a drive to fail.

One increasingly common reason, however, is viruses and malware from the Internet. And it’s becoming increasingly more complex. In fact, researchers from the University of Michigan found that hackers can now use ultrasonic waves to force crash a disk and induce permanent data loss. That’s why all major industries are now upgrading how they protect their data, with many looking to hire onsite professionals. To get a sense of how serious the situation is, Maryville University’s evaluation of the cyber security industry details how the demand for specialists in this field has doubled since 2013. The swell of attacks not only target large companies but also consumers and small businesses. As the world’s reliance on keeping data safe increases, expect this particular industry to grow even more.

How to recover lost data

Recovering files can be tricky, so you shouldn’t be impulsively trying everything you read in online forums. First, do not use or install anything on the crashed hard drive as it can overwrite your missing files—and yes, that includes even recovery tools.

If you’re thinking of doing the “freezer trick” (i.e. putting the drive in a freezer to recover data, a popular "hack" in the past), think again. PCWorld reports that experts have weighed in on this and have said that it does more harm than good. And while it’s tempting to try “hacks” to recover your data, they can prove counterproductive if you try untested ones.

Instead of all those, plug the hard drive into a working computer and then check to see if your files are there. If it’s not an HDD failure, then you can use recovery tools in the OS of your computer to revert to a previous version.

Fortunately for those using Mac systems, these computers have a built-in checking tool called the Apple Hardware Test. This includes an automated disk utility that can detect and sometimes solve problems. You can also plug the drive into another computer and use a tool called Target Disk Mode. This way, you’ll know if it’s the hard drive that’s causing the issue or something else entirely.

If it is the drive that’s causing the problem, try searching for the files that you want to recover using the Windows Searchlight tool or the Mac search bar. If you still can’t find them, make sure you don’t hear clicking sounds as this will probably mean that you need to get it repaired by a professional. If you found them and your computer describes them with one of these, proceed to step 3:

• The file is corrupt and cannot be opened.

• The file or directory is corrupted and unreadable.

• There was an error opening this document. The file is damaged.

Before you go further, it’s important to note that if your files are made with apps like Microsoft’s, they offer built-in tools that can recover corrupted or missing documents. Even if you just manage to get a .txt file, it’s a big difference compared to having to start your work all over again.

Bad sectors are compartments in your drive that do not maintain data integrity. Physical damage or problems with the transistor may be causing this—rendering them unreadable and unwritable. These are sneaky culprits, as your OS tends to mask them, but are troublesome when you do run into them.

Luckily, Windows has recovery options that let you check for bad sectors in the chkdsk command, which is an option aptly named: ‘Scan for and attempt recovery of bad sectors’. If this doesn’t solve it, the most you can get out of the tool is an assessment of whether or not bad sectors are causing the failure. If they are, then you can use disk cloning tools to copy and recover them to another hard drive.

If that doesn’t solve the problem, what you can do is install a recovery program. Most recovery software out there give out a free trial period with a data cap, but do keep an eye out for tried and tested programs for better chances of success. TechRadar’s list of the best free recovery software tools explains that while most are effective, for more serious issues you may need to pay for a better program. Our tech support team here recommends using DiskInternals NTFS Recovery.

If your files are corrupted or missing, having a recovery program helps you determine if it’s a malware or a bad update causing it. This is important because even if you do recover the files you need, your other files might follow suit if the problem is not addressed.

Most files not caused by mechanical failures should’ve been recovered by the steps mentioned above. But if your hard disk is still corrupted, don’t fret. Windows has a tool called System File Checker. This handy utility program scans for corrupted files and replaces them with originals. But if the problem persists, it’s best to call professionals.

Protect yourself from another drive crash

If you have gone through all that, then you wouldn’t want a repeat performance. So, to save yourself from the ordeal of trying to find and recover your hard disk files all over again, it’s best to take some preventive steps. Here are some very important things to consider:

This cannot be stressed enough. The best way to ease your mind is to invest in backup storage. Most computers today have at least two hard drives and, since both of them crashing is very rare, you can use the other as a temporary storage. A 2TB thumb drive is also a cheap option as they’ve become more accessible now—most come under $60. You can also use a cloud storage solution for real-time or continuous backup mechanisms.

Opt for an SSD

While we mentioned that SSDs can fail too, they’re faster and more resilient to bad sectors and crashes than HDDs. Their increased efficiency and better system cooling eliminates some of the most common but avoidable causes of disk failures.

When your computer becomes sluggish, or if it freezes frequently, it’s a sign that you’re headed into some problems in the near future. And while these are not necessarily caused by your HDD, you should take these as a hint to back up your files as soon as you can. If these problems persist even if you boot into Windows Safe Mode, there’s a high chance that your disk is failing.

By this, we mean that you should use the Self-Monitoring, Analysis, and Reporting Technology or SMART tool native in your OS. While this doesn’t prevent crashes, it closely monitors your computers’ hard drive and warns you if a crash is imminent.

There’s a reason why most warranties only last for two years. As mentioned above, early life failures of hard drives (i.e. first 18 months) are usually caused by manufacture defects or random occurrences. But as the disk approaches its fourth year, wear out failures brought about by accumulating bad sectors or normal mechanical wear and tear become common.

When it comes to protecting your files and the health of your hard disks, remember that prevention is always better than cure.