What RAID is best for video editing? 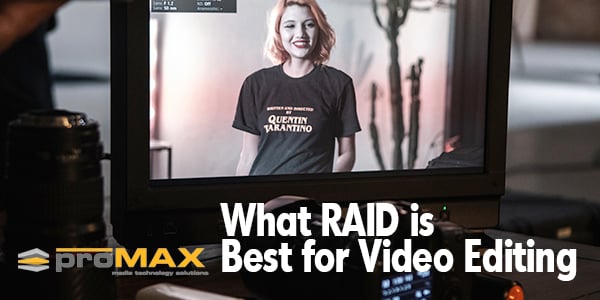 RAID (redundant array of independent disks or previously redundant array of inexpensive disks) simply means several hard drives compounded together, operating as one single super- hard-drive. The RAIDs come in different kind of configurations and provide fault tolerance, strengthen the overall performance, and increase the storage capacity of the system.

RAID uses redundancy in a balanced way to enhance the performance of the system many folds. Normally RAID is ­found in the network-attached storage (NAS) environments, famous for enormous storage, backup, and media streaming solution. The data virtualization technology blocs several physical disk drives with either SSDs or HDDs into a single logical unit that can improve performance, data redundancy, or both. There are two types of RAIDs a less commonly used software RAID and a hardware RAID with a built-in RAID controller.

In a pure operations viewpoint, the difference between software and hardware RAID is somewhat little. The main difference boils down to where the RAID processing is performed. In software CPU power is used to either backup or optimization for speed. The several RAID levels are implemented in the kernel disk (block device) code. This does cost less but can potentially slow down your other applications running on your system.

While the hardware RAID comes with a built-in RAID controller and its CPU managing the RAID subsystem independently from the host. The logical disks are already configured, whereas in software RAID configuration needs to be performed in the system. As the hardware RAID storage works outside the system and operating system, in principle it can support more kinds of systems. A RAID controller offers a level of protection for stored data and might help improve computing performance.

There are a lot of different RAID configuration options for your 4K video editing environment depending on how much redundancy or efficiency aka stripping you want. RAID options are called levels and there a number of them starting from RAID 0 up to RAID 60, with each level designed for specific requirements. The core attributes for all these level distributions are the minimum number of drives required, read performance, write performance, capacity available.

To understand the difference between RAID levels and configure the best option for your creative video and photo editing workflow.

Primarily designed for a significant increase of Input/output performance. In this level we have something called strips – a strip is a predefined number of contiguously addressable disk blocks. Collection of such strips aligned in multiple disks is known as the stripe. The minimum number of drives required are two, with super high read/write speeds depending on the number of hard drives or solid-state drives in the configuration, and with the utilization capacity at 100 percent.

Though the bad side of this level is, it doesn’t support mirroring aka redundancy and parity so don’t have fault tolerance. However, you won’t be able to back up your data which can be the potential downside for some video geeks. Typically RAID 0 is used for high-end tasks like ultra-high-definition video editing, motion graphics, or for high rendering systems.

A simple and reliable way of data protection - redundancy, this technique just makes a mirror copy of the disk you want to protect. Data availability is made sure in case of failure of one drive and data controller serves from the copy disk. However, mirroring slows down the performance, read throughput is improved as either disk can be read from while the write speed is the same as for single disk storage. With RAID 1 you’ll require minimum 2 drives for duplexing, with the available capacity of only 50 percent.

The most popular option among video editors is a combination of both speeds of RAID 0 and data protection of RAID 1 in one configuration. RAID 5 is also by far the most common RAID configuration used throughout businesses and NAS devices. This level utilizes parity with striping for a low-cost reliable solution for data protection. Using an additional disk to the stripe width that’ll hold parity bit to re-create the data automatically in case of failure.

For this reason, this level requires a minimum of 3 drives and capacity utilization is around 75 percent in general. With increasing drives, the storage you lose decreases i.e. at 3 drives you lose 33 percent and at 4 drives you lose only 25 percent of storage.

RAID 5 only can bear a single drive failure so if two drives fail all of your data can be lost. Another advantage of this level is it’s “hot-swappable” essentially meaning if a drive fails in the array, it can be swapped without shutting down the server or NAS, which means no interruption for users. RAID 6 is an addition to RAID 5 with one more parity block and can sustain two drives failure and still be operational, though requiring an extra drive i.e. a minimum of 4 drives.

Although there are many other levels available which are essentially the combination of the lower simple levels. For example, RAID 10 (RAID 1+0), 50 (RAID 5+0), RAID 0+1 and RAID 60 (RAID 6+0) provide faster performance and redundancy with the initial cost increasing many folds. The configurations have their advantages in certain specific cases but with more complex implementation and maintenance requires more work and budget.

All in all, RAID is a substantial way to optimize NAS and server performance also with quick recovery from hardware failure. Sod’s law rules that all hardware will fail, with HDDs, remember the maxim ‘use a disk, take a risk’, while SSDs are good but not altogether immune.

RAID isn’t data backup this rule should be kept in mind while opting for a storage solution. Despite the fact some RAID levels do come with redundancy, experts opine they should not be confused with disaster recovery and separate storage system needs to be utilized. Ensure to observe industry practices concerning redundancy and data backup.

As Jess Hartmann, CEO of ProMAX describes the platform “workflow server that enables creative collaboration through Shared Storage, Asset Management, and Archiving”. With the ProMAX Platform of shared-storage workgroup-oriented products, specially designed for video editing and browser-based control software you can set-up and get going with your RAID in minutes.

ProMAX Systems provides every bit of information to set up a RAID array and connect it to ProMAX SSD hardware. The platform provides guidelines for setting up RAID on systems having an internal RAID or expansion chassis installed. The system including other configurations supports RAID 5 and RAID 6, the most desirable configurations for a video editing environment with 4K block size and 1024Kbytes of stripe size.

Once the setting is done, you’re good to go with the RAID storage having its enormous benefits i.e. robust performance and redundancy over conventional JBOD (just a bunch of disks) with ProMAX tools and facilities that you won’t find on other shared storage systems.