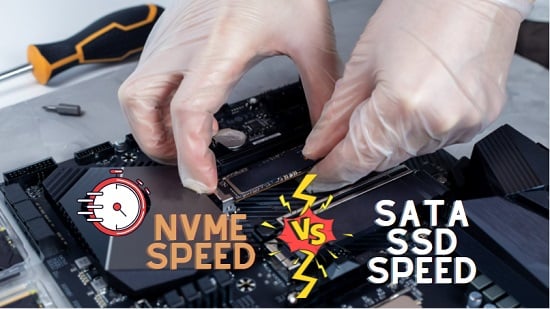 In today's fast-moving world, it is critical to arm your business processes with the best available resources. And when it comes to state-of-the-art technology for storage, most businesses find themselves in a dilemma of choosing one over the other.

While there are several storage solutions such as SSDs, HDDs, etc., nothing tops the performance of NVMe drives. NVMe speed is much faster than any other storage solution, primarily because it uses a novel mechanism to read and write data at exceptional speed. The NVMe protocol is typically six times faster than SATA, depending on the R/W speed of each device utilizing the PCIe Bus. The point being SATA has speed limitations PCIe isn't bound to.

It is well established that most businesses rely on data or information of some form or another to function seamlessly and successfully. Many companies and organizations struggle to handle the growth of data at exponential rates. These companies need to reconsider the effectiveness and efficiency of the storage systems in place.

Setting up an impeccable storage system can be the most significant boost to any business that thrives on data. In this blog, we compare the NVMe speed with the speed offered by the latest SSD drives to help you better understand how each works. 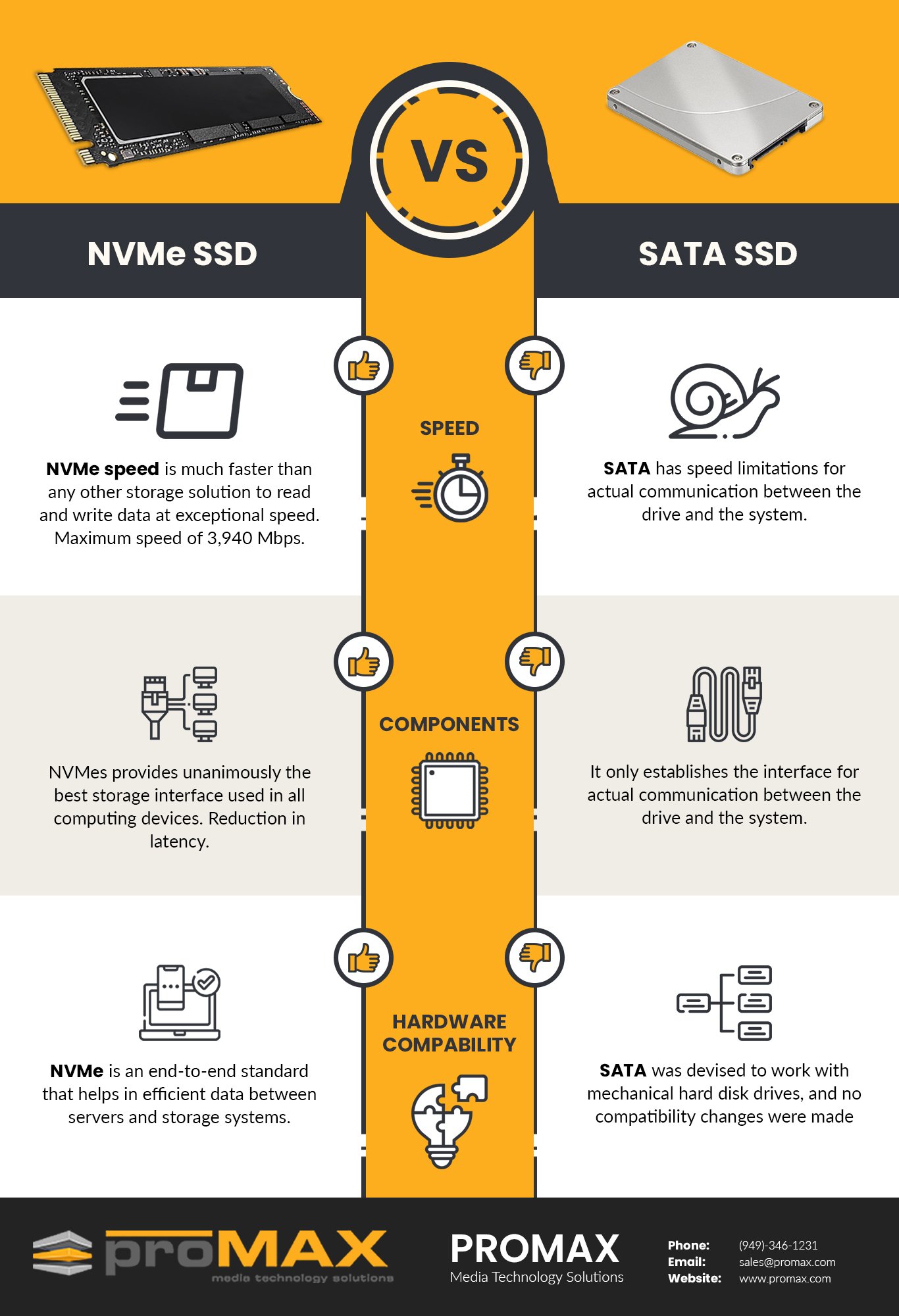 NVMe can be defined as a combination of a host controller interface and a storage protocol that works with high speeds and accelerates the data transfer rate between two or more entities. The said entities could be anything from SSDs to client systems and even enterprises. NVMes are designed to help SSDs function at operating speeds that are equivalent to that of flash memory.

There is a dramatic improvement in the read-write speeds and with the usage of NVMe. The NVMe SSD helps the data run via the PCI Express interface, which offers high bandwidth. You can attribute the improvement in bandwidth to the fact that the interface is attached to the CPU directly rather than through a SATA interface. SSDs are far more efficient and capable than their HHD counterparts. With a fast interface, such as NVMe, you can expect nothing less than optimal performance and great speed capabilities.

To put it into a better perspective, you can describe the technology as a variant of the bus that helps any memory component (such as SSD) connect and communicate with the system, and it is not a new variant of memory like most people would perceive. It comprises a driver, communication interface and is available in different form factors such as PCIe expansion card (M.2) and U.2 connector.

Despite the form factors, the interface connects to the motherboard through PCIe, and no SATA connection is involved. One of the most mind-boggling facts about NVMe is that it can support almost 64K commands in a single queue, while the protocol requires not more than thirteen commands. Hence, you can be sure of pristine performance and speed. The NVMe interface is also very scalable, and its flexibility aids technologies to offer a 4KB I/O in less than 10 microseconds. If you compare this to a 7200 RPM SATA drive, showing high power, NVMe is almost a thousand times faster.

Compared to an AHCI controller (the one that SSDs use), the NVMe controller has a lower latency and can process an additional two thousand commands to or from the disc. To get the best performance out of an NVMe disc, make sure it is connected via PCIe (Peripheral Component Interconnect Express).
NVMe is also termed as NVMHCIS (Non-Volatile Memory Host Controller Interface Specifications) in some contexts. This Logical-device interface helps capitalize on the internal parallelism and lower latency of SSDS and brings about fantastic performance.

Speaking of the architecture, the NVMe logic is stored in an NVMe controller chip that executes the same. You can find the NVMe co-located physically with the traditional storage media of a system. In most cases, this storage media is an SSD. You can continually update the versions of the NVMe within the SSD, and it will not affect the PCIe compatibility.

Take the industry-standard PCIe, which is 985 Mbps for one lane, to appreciate the difference better. NVMe drives may utilize four lanes and reach a maximum speed of 3,940 Mbps. The difference is enormous, making NVMes better than SATA SSDs. NVMe is a logical architectural method that operates within an SSD and uses the M.2 interface to deliver the fastest transmission rate possible.

The NVMe design helps host software and hardware to maximize the various levels of parallelism in modern storage devices such as SSDs. This results in:

Older interface protocols such as AHCI were designed to be compatible with slower Hard Disk Drives, and hence there was a long delay or gap between request commands and actual data transfer. The data speeds are prolonged in this case, along with factors like seek time and disk rotation, giving rise to a need for an optimized solution.

When it comes to SATA devices, if a drive is connected to a computing system utilizing a SATA controller (Serial Advanced Technology Attachment), it only establishes the interface. For actual communication between the drive and the system, a host controller interface such as an AHCI must be introduced. During the beginning stages of SSDs, the SATA-AHCI combination worked quite admirably, but they simply could not provide the required bandwidth for SSDs with increased capacities over time.

The capabilities of SSDs and their drive speeds are expanding every day, leading to a need for better alternatives that are more scalable, and this is precisely what NVMes provide. NVMe is unanimously the best storage interface used in all computing devices like laptops, desktops, etc. They offer a dramatic difference in Read /Write speeds compared to other conventional interfaces like SATA.

Most SSD devices seek the help of SATA buses, Fibre Channel, or SAS to form an interface with the computing system. Ever since SSDs entered the market, people have been using SATA buses as the most typical option for connecting storage drives such as SSDs to personal computers.

But, SATA has initially been designed to be compatible with more mechanical HDDs. There was a prominent gap in the requirements and purpose, making SATA inadequate to perform with SSDs. While SSDs kept improving in speed, it was almost impossible for SATA buses to deliver the expected performance and speed. This limited the usage of SSDs to unprecedented levels. 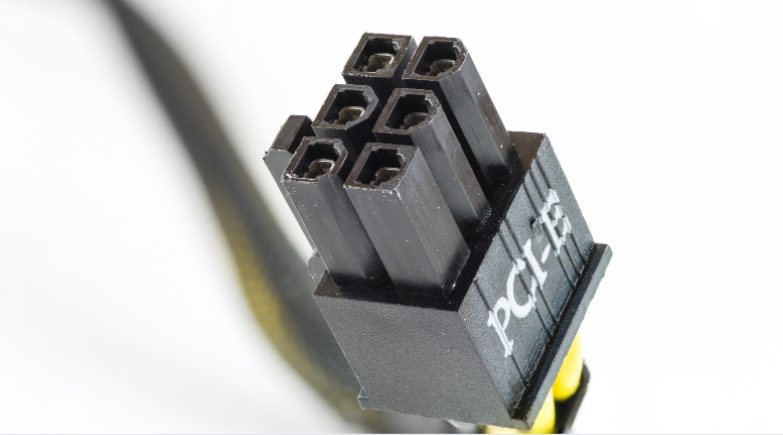 There were instances when sophisticated SSDs were made with PCI Express before NVMe was introduced, but the specification interfaces were not standardized. After the standardization of the SSDs interfaces, the adhering process became straightforward as operating systems required nothing more than a typical device driver to connect with all SSDs, despite their specification.

The standardization process also relieved SSD manufacturers from the pain of using additional resources to manufacture interface drivers that are specific to every instant. You can compare this to USB devices made to work with a standard class specification and connect with all computers without any other particular drivers.

Since we have established the improvement in performance rates with NVMe, you must check the compatibility factors before making a purchase. The first factor is hardware compatibility. It would be best if you looked for a built-in M.2 slot that supports NVMe. You might have to look into your computer's product catalog or manual to know if it has an M.2 slot. The second factor is the compatibility offered by your motherboard. You have to check if your motherboard can support NVMe devices.

You must look for the terms "NVMe support" or "PCIe mode" to find motherboard compatibility. Even though there is no straightforward way to tell if your system supports NVMe, you can use the two main factors mentioned above to determine the same. For further details, you need to refer to your motherboard's company website and do some browsing to find out.

The SATA interface, previously used, was devised to work with mechanical hard disk drives, and no compatibility changes were made. Even though the SATA SSDs can use the current infrastructure to replace hard drives with new SATA drives, this system cannot fit an NVMe interface. Since an M.2 port is mandatory, it could be challenging to find it in older laptops and personal computers. 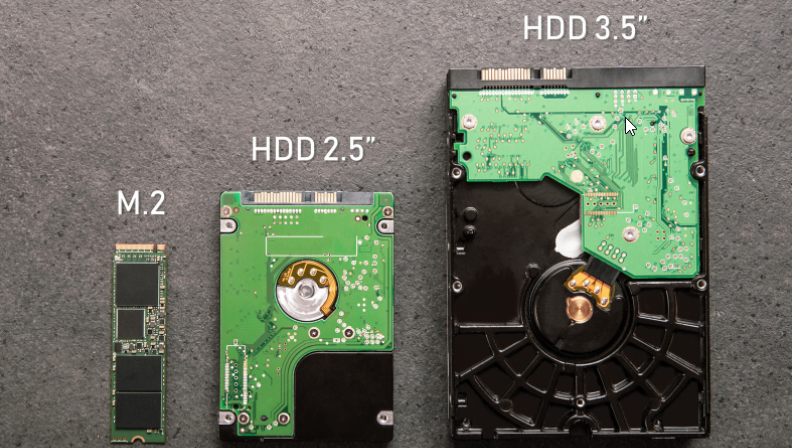 Besides the hardware compatibility, Operating System compatibility is also important. The latest versions of all the operating systems, including Windows, Linux, Mac OS, and Chrome OS, support NVMe. However, Mac OS has an issue because you cannot upgrade Apple hardware on the recent models, and this could exclude Mac users from the scene.

Most Cloning software available in the market is now compatible with NVMe drives, but it is always better to look into the product pages to be sure. ATA interface constrictions do not affect NVMes as the PCI Express is right underneath, connecting the interface directly to the CPU. This results in Input/Output Operations (IOPs) four times faster than the fastest SATA or SAS option you can find. The data seek time is a whopping ten times faster too. All these factors contribute to a sustained read-write speed of around 2000 Mbps, which in comparison with the 600 MBs of SATA SSD, is more than three times faster.

The NAND technology that forms the basis of NVMe is rapidly evolving, making it more likely for higher speeds of NVMe soon. For those of you comparing NVMe to flash storage, there is so much more to it. You could say that NVMe is an end-to-end standard that helps in efficient data transfer between servers and storage systems.

How Do You Know if NVMe is Useful?

NVMe drives consume less power than other traditional memory drives, and from a business perspective, it reduces the TCO or Total Cost of Ownership of companies. Besides, access to data is faster than ever in this case. NVMes have also proven to reduce latency rates and deliver higher IOPS (Input/Output per Second) than any counterpart in the market.

NVMe has many latency benefits across various network fabrics like Fibre Channel, Ethernet, and InfiniBand. All applications, be it consumer-based or business-based, look for faster response times, and as the complexity of these applications increase, the storage interface needs to keep up.

NVMe is fast, really fast! That's because NVMe SSDs can read and write data much faster than SATA SSDs. It utilizes the PCI Express (PCIe) data transport layer for graphics cards. Third-generation PCIe bus offers up to 16 lanes for use, offering speeds of up to 1 Gbps. You can have one, four, eight, or 16 lanes in a single PCIe slot, increasing your video editing computer's performance manifold.

As a result of this unique configuration of inbuilt parallelism and increased bandwidth, NVMe storage enables the device's multiple cores to read and write seamlessly. And to top it all, data is stored in the flash memory that doesn't have any moving parts, lowering the chances of data loss due to disk failure.

NVMe has multiple use cases as follows:

NVMe is designed for high performance, and it stands out from other protocols, especially in compute-intensive ecosystems. The low latency and optimized performance make this system almost incomparable. Besides, it can be more than beneficial for enterprise systems and can drive business efficiency. Even though the benefits of switching to NVMe are apparent, it is always wise to understand your processes and requirements before pressing the switch.

Now that you are aware of the main distinctions of NVMe speed against SATA speed, we strongly advocate that you select NVMe for your storage needs. And if your organization needs state-of-the-art storage, check out ProMAX Systems, which offers a wide range of centralized storage solutions for video pros, teams, and agencies, including NVMe drives, SSDs, asset management, cloud storage, backups, archives, etc.