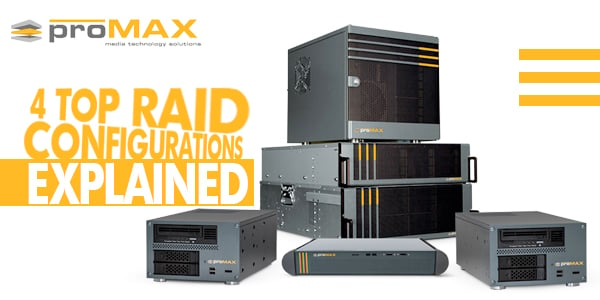 RAID (redundant array of independent disks) are multiple hard drives combined and operating as one super hard drive. If you deal with large media files, you’ll likely need more storage and redundancy than a single drive can offer. While you can put a bunch of drives together to enhance the workflow but the RAID was designed to improve upon performance and redundancy in storage systems with much fewer efforts required from you in monitoring, maintenance and cost of adding more and more drives as compared to in another environment like JBOD (just a bunch of disks). There are two types of RAID storage administrators can deploy – a hardware RAID (RAID controller card or RAID-on-chip) or a software RAID (software-only or hybrid).

RAID can be set-up with different configurations and offer fault tolerance, strong performance, and increase in the storage capacity of the system. It uses redundancy in a balanced manner to increase the overall performance of the system many folds. Generally, RAID is employed in network-attached storage (NAS) environments, known for massive storage, backup, and media streaming solution. With data virtualization blocs several physical disk drives either SSDs or HDDs into one single logical unit that can enhance performance, data redundancy, or both at the same time. Software RAID is much easier and cheaper to implement but does take a toll on the performance of the system as it uses the computer resources while the hardware RAID with built-in RAID controller is much faster and costlier.

You can use different RAID configuration options for your ultra-high-definition 4K video editing needs relying on how much redundancy or efficiency or just one of them you want. RAID options are known as levels and you can find several of them starting from RAID 0 up to RAID 60 and in between, with each level intended for specific requirements. The main attribute for all these level disseminations is the minimum number of drives required, read-write performance, capacity available for use and data mirroring.

Let us dive deeper into understanding the difference between various RAID levels and configure the best choice for creative and performance-oriented video editing workflow.

RAID 0 also known as “data striping arrays” or “non-redundant arrays”, equally divides the data across the disk drives. This level utilizes the strips – a strip is an amount of contiguously addressable disk blocks, treating the striped disks as a single partition. Multiple disks aligned together with such strips are known as the stripe. The minimum number of disk drives required for this configuration is two, giving exceptionally high speeds of read-write which also depends on the number of solid-state drives or hard drives in the configuration, so the more drives you have in your enclosure the more speed it will have and the utilization capacity is at 100 percent.

In case you are working with 4K or 8K RAW footage with motion graphics and visual effects – RAID 0 is the configuration you would need for smooth performance. Though RAID 0 arrays don’t provide fault tolerance or redundancy, simply means you have no protection against the many types of hard drives failures that can destroy your data. Mirroring or back up won’t be available and can be a potential downside for many videographers. In the end, RAID 0 is your companion for high-end video editing tasks featuring ultra-high-definition editing, 3D modeling, and motion graphics systems.

The exact opposite of RAID 0, with the most amount of redundancy aka failover or backup you can find in any RAID configuration. Requiring a minimum of 2 drives for duplexing and with 50 percent of capacity allocated for redundancy, you’ll get half of the whole capacity available for use. Though you’ll get 50 percent capacity but with 100 percent backup – which is always good. If one of the two drives ever fail from mechanical failure, you can just pop the faulty one out and put a new one in the hardware RAID you’re using, and it will just rebuild itself and replicate all the data on it without a byte lost.

The mirroring does slow down the performance, the read speed is improved as either drive can be read from while the speed to write is the same as for single disk storage. RAID 1 is not quite a choice for a videographer as it takes a lot of time in mirroring, reduces the storage to half unless you need to have a backup of everything on the go and does take a toll on the budget.

RAID 5 and 6 – Striping with Parity

The combination of both worlds – speeds of RAID 0 and data protection of RAID 1 into one configuration brings the most popular setting for video editors. RAID 5 is considered the most widespread RAID configuration used throughout businesses and NAS devices. Configuring the best of both the striping and redundancy are known as distributed parity for an inexpensive reliable solution for data protection. To hold parity bit for re-creating the data automatically if a failure occurs, an additional disk is attached to the stripe width.

Therefore, this level needs a minimum of 3 drives and capacity utilization is about 75 percent overall. If the drives in the configuration are increased the storage capacity available also increase i.e. at 3 drives, you’ll lose around 33 percent and at 4 drives you only lose 25 percent of the storage capacity. It is recommended to use five or more drives for performance enhancement.

RAID 5 is designed in a way that it can only endure a single drive failure, therefore if two drives fail all the data will be lost. On the contrary, if a single drive fails this level facilitates with “hot-swappable” capability meaning in the array if a drive fails, it can be easy swapped without turning off the server or NAS, no interruption for users whatsoever.

RAID 6 is an addition to the RAID 5 level with one more parity block and can essentially sustain two drive failures and still be operational, which requires an extra drive such that minimum of 4 drives is required. You’ll lose half of your storage if you go with four drives and 33 percent if you go with six drives and so on.

RAID 50 or RAID 5+0 combines the striping of RAID 0 with distributed parity of RAID 5. RAID 50 offers much faster read-write speeds than RAID 5 though dependent on other factors as well with the cost of initial deployment rising with minimum 6 disk drives required. RAID 50 can survive multiple drive failures as far as the drives happen to be at the right places.

RAID 60, precisely RAID 6 combined with RAID 0 requires at the least 8 drives to start working. Provides faster performance and redundancy with the initial cost increased significantly. But things get a little more complicated than in the single RAID configurations, for example, in case you have 9 drives split into three separate sets in RAID 50, you will lose one in each set for parity so meaning you can lose 3 drives if they are each in a different set. For RAID 60 if you have 8 drives split out into 2 different sets, you lose 2 drives in each set.

There are many other levels offered by RAID primarily the union of lower simple levels. Such as RAID 10 (RAID 1+0), RAID 0+1 and others with the cost increasing many folds. The different configurations are designed for certain specific requirements and with much complex implementation and maintenance work and budget.

By and large, RAID offers a significant means of optimizing server and NAS performance with robust recovery from hardware failures. Sod’s law articulates that all hardware will fail, essentially, with hard drives, keep in mind the maxim ‘use a disk, take a risk’, while SSDs, in contrast, are proficient but not altogether immune.

While choosing between storage solutions this should be remembered that RAID isn’t data backup, its active storage with a backup solution. Even though RAID levels do offer some redundancy, experts say they shouldn’t be mistaken for disaster recovery and specific recovery systems need to be employed. Make sure to comply with industry practices vis-à-vis redundancy and data backup.

Our CEO here at ProMAX – Jess Hartmann describes our platform as “workflow server that enables creative collaboration through Shared Storage, Asset Management, and Archiving”. The ProMAX Platform with shared storage workgroup-oriented products, particularly designed for video editing and browser-based control software one can easily set-up and get going with your desired RAID setting in mere minutes.

ProMAX Systems offers all the information you’d need to set-up a RAID array using ProMAX hardware in the “How to create” guide both for setting up RAID on systems having internal RAID or expansion chassis installed. The system supports the most commonly used solution by video editors – RAID 5 and RAID 6, editing powerhouse with 4K block size and 1024Kbytes of stripe size.

With the no-brainer configuration of RAID by ProMAX Systems, you can have the many benefits of RAID storage – strong performance and redundancy over the outdated JBOD and other storage solutions with ProMAX tools and features that you won’t be able to find on any other shared storage system.