What to Know when it comes to Thunderbolt Shared Storage

Thunderbolt connectivity has been a mainstay in professional video production teams since it’s inception in 2011. It gave us all the high-performance connectivity that we always wanted out of USB, though admittedly, at this point USB is pretty impressive!

With the introduction of the Macbook Pro that year and the soon following pseudo-affectionally referred to ‘trash can’ Mac Pro, finally users had legitimately high-speed connections directly on their Mac’s. A welcomed change from 10 years of adding Fibre Channel HBA’s to get anything resembling usable performance.

So immediately the logic question ‘can we just connect this high-speed thunderbolt port to a shared storage network?’ 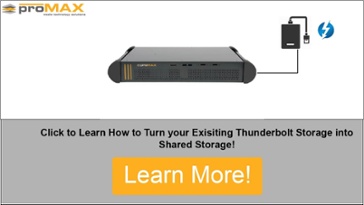 For years the answer has ranged from sort-of to maybe?

Fast forward to today, and the answer is yes, with some caveats to be aware of. Here is a comprehensive list of what to be ware of when it comes to networking over thunderbolt.

Thunderbolt NAS vs Connecting to a NAS over thunderbolt.

There very few actual Thunderbolt NAS devices, only 2 or 3 currently on the market. The far more common way to take advantage of thunderbolt to connect to a shared storage server is through Thunderbolt to Ethernet adapters. These range from $30 to $700 depending on if you Thunderbolt 2 or 3, and if you want to connect to the NAS via 1GbE, 10GbE or 10GbE optical. See the diagram below.

For smaller workgroups that do not need to be able to grow into a larger solution and are working in the same room, Thunderbolt NAS systems offer the ability to connect to a shared server without an additional adapter.